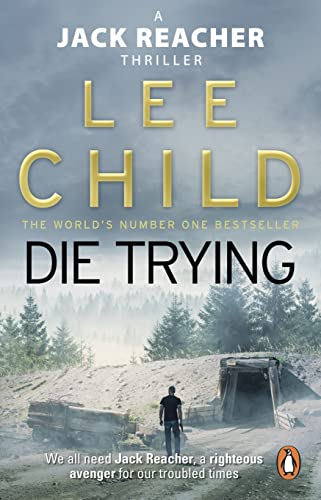 And turns to see a handgun aimed at his stomach.

Chained in a dark van racing across America, Reacher doesn't know why they've been kidnapped.

Although the Jack Reacher novels can be read in any order, this is the 2nd in the series.

A Chicago street in bright sunshine. A young woman, struggling on crutches. Reacher offers her a steadying arm.

And turns to see a handgun aimed at his stomach.

Chained in a dark van racing across America, Reacher doesn't know why they've been kidnapped. The woman claims to be FBI. She's certainly tough enough. But at their remote destination, will raw courage be enough to overcome the hopeless odds?

Although the Jack Reacher novels can be read in any order, this is the 2nd in the series.

Jack Reacher is a wonderfully epic hero; tough, taciturn, yet vulnerable... Irresistible * People *
Reacher combines the physique of the Commando-period Schwarzenegger with the analytical brilliance of Sherlock Holmes * Himself Magazine *
The taut plot, set firmly in headline territory, lays bare the world of the rabid, worm-like militias crawling in the political underbelly of America... This is an action adventure that never gives you a moment's peace and quiet - an excellent read * Publishing News *
Cunning and explosive...A thumping good read * Time Out *
A skilled, smart, violent page-turner * Daily Express *

Lee Child is one of the world's leading thriller writers. He was born in Coventry, raised in Birmingham, and now lives in New York. It is said one of his novels featuring his hero Jack Reacher is sold somewhere in the world every nine seconds. His books consistently achieve the number-one slot on bestseller lists around the world, and are published in over one hundred territories. He is the recipient of many prizes, most recently the CWA's Diamond Dagger for a writer of an outstanding body of crime fiction.

Jack Reacher, the first Jack Reacher movie starring Tom Cruise, was based on the novel One Shot, and the second is Jack Reacher: Never Go Back.

GOR002323153
Die Trying: (Jack Reacher 2) by Lee Child
Lee Child
Jack Reacher
Used - Very Good
Paperback
Transworld Publishers Ltd
2010-12-09
576
0857500058
9780857500052
N/A
Book picture is for illustrative purposes only, actual binding, cover or edition may vary.
This is a used book - there is no escaping the fact it has been read by someone else and it will show signs of wear and previous use. Overall we expect it to be in very good condition, but if you are not entirely satisfied please get in touch with us.