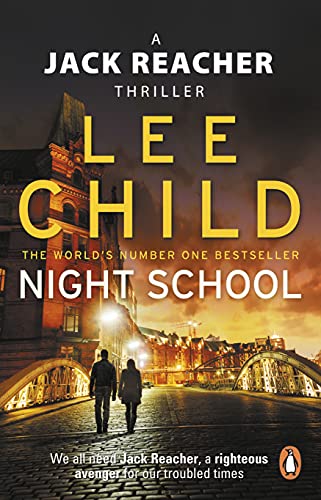 In Stock
£2.99
Reacher.In the morning they gave Reacher a medal, and in the afternoon they sent him back to school. The Army pats him on the back and sends him to a school with only three students: Reacher, an FBI agent, and a CIA analyst. Although the Jack Reacher novels can be read in any order, Night School is 21st in the series.
Very Good Good
19 in stock

"I know I say this every year. . .But. Best. Reacher. Ever." (Karin Slaughter) It's just a voice plucked from the air: `The American wants a hundred million dollars'. For what? Who from? It's 1996, and the Soviets are long gone. But now there's a new enemy. In an apartment in Hamburg, a group of smartly-dressed young Saudis are planning something big. In the morning they gave Reacher a medal, and in the afternoon they sent him back to school. Jack Reacher is fresh off a secret mission. The Army pats him on the back and sends him to a school with only three students: Reacher, an FBI agent, and a CIA analyst. Their assignment? To find that American. And what he's selling. And to whom. Although the Jack Reacher novels can be read in any order, Night School is 21st in the series.

"Ever more gripping...Night School is the closest that Reacher has come to being a secret agent, making this expertly paced thriller and addictive combination of spy yarn, detective story and beat-'em-up fightfest." * Sunday Times *
"I know I say this every year...But. Best. Reacher. Ever." -- Karin Slaughter
"Reacher... wins all fights, charms all women and outsmarts all rivals, friend or foe.What makes Night School the best of the Reacher novels I've read is that Child has concocted a brilliant plot...battling to save America, or maybe the entire civilised world, from a terrorist plot that is original, engrossing and all too believable...one of the best thrillers you'll read this year." * Washington Post *
"Dripping with irony and oozing dread...utterly gripping...Acute observation reveals "every detail of the glowing scene". Many so-called literary novels lack such skill." -- Mark Sanderson * Evening Standard *
"This latest instalment has all the classic ingredients: a great setting, a good villain, and a mystery that draws you in efficiently, escalates unpredictably, and has a satisfying resolution." -- John Lanchester * New Yorker *

GOR008227044
Night School: (Jack Reacher 21) by Lee Child
Lee Child
Jack Reacher
Used - Very Good
Paperback
Transworld Publishers Ltd
2017-03-31
480
0857502700
9780857502704
N/A
Book picture is for illustrative purposes only, actual binding, cover or edition may vary.
This is a used book - there is no escaping the fact it has been read by someone else and it will show signs of wear and previous use. Overall we expect it to be in very good condition, but if you are not entirely satisfied please get in touch with us.