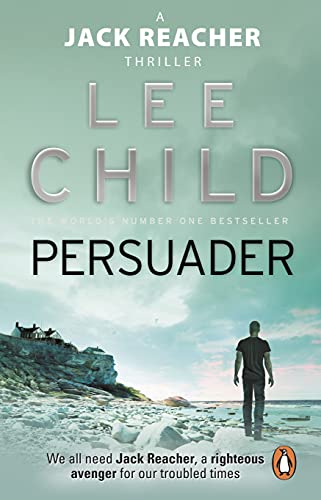 Used Price
£2.99
New RRP £8.99
Free Shipping in the UK
(Daily Mail)Never forgive, never forget. But he has a burning desire to right wrongs - and rewrite his own agonizing past.When Reacher witnesses a brutal kidnap attempt, he takes the law into his own hands. Has Reacher lost his sense of right and wrong?Although the Jack Reacher novels can be read in any order, Persuader is seventh in the series.
Very Good Good Well Read

"Ballsy, dynamic and not for the faint-hearted." (Daily Mail) Never forgive, never forget. Jack Reacher lives for the moment. Without a home. Without commitment. But he has a burning desire to right wrongs - and rewrite his own agonizing past. Never apologize. Never explain. When Reacher witnesses a brutal kidnap attempt, he takes the law into his own hands. But a cop dies. Has Reacher lost his sense of right and wrong? Although the Jack Reacher novels can be read in any order, Persuader is seventh in the series.

"Ballsy, dynamic and not for the faint-hearted" * Daily Mirror *
"The blend of dialogue, atmosphere, action and plot will grip readers from the first page and further cement Lee Child's reputation as a world-class thriller writer...This is everything a thriller should be" * Crimetime *
"One of the best writers in this genre...Reacher is in top form" * Sunday Telegraph *
"Scrupulously structured...A thrilling and reputable read" * Literary Review *
"The seventh novel in the best-selling Jack Reacher series. PERSUADER is another gripping thriller" * OK! Magazine *

Lee Child is one of the world's leading thriller writers. He was born in Coventry, raised in Birmingham, and now lives in New York. It is said one of his novels featuring his hero Jack Reacher is sold somewhere in the world every nine seconds. His books consistently achieve the number-one slot on bestseller lists around the world, and are published in over one hundred territories. He is the recipient of many prizes, most recently the CWA's Diamond Dagger for a writer of an outstanding body of crime fiction. Jack Reacher, the first Jack Reacher movie starring Tom Cruise, was based on the novel One Shot, and the second is Jack Reacher: Never Go Back.

GOR002684889
Persuader: (Jack Reacher 7) by Lee Child
Lee Child
Jack Reacher
Used - Very Good
Paperback
Transworld Publishers Ltd
2011-01-06
544
0857500104
9780857500106
N/A
Book picture is for illustrative purposes only, actual binding, cover or edition may vary.
This is a used book - there is no escaping the fact it has been read by someone else and it will show signs of wear and previous use. Overall we expect it to be in very good condition, but if you are not entirely satisfied please get in touch with us.