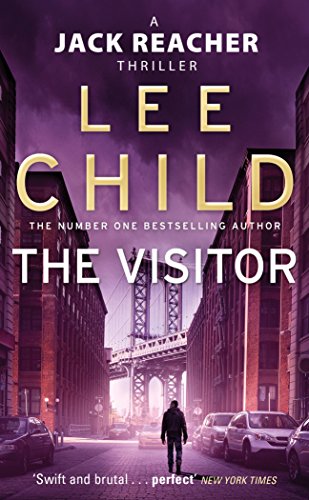 The Visitor
by Lee Child

In Stock
£13.99
Featuring Jack Reacher, hero of the blockbuster movie starring Tom Cruise.Sergeant Amy Callan and Lieutenant Caroline Cooke have a lot in common. Both were aquainted with Jack Reacher. Apparent victims of an army man. A loner, a smart guy with a score to settle, a ruthless vigilante.A man just like Jack Reacher.
Very Good Good Well Read
17 in stock

Featuring Jack Reacher, hero of the blockbuster movie starring Tom Cruise. Sergeant Amy Callan and Lieutenant Caroline Cooke have a lot in common. Both were army high-flyers. Both were aquainted with Jack Reacher. Both were forced to resign from the service. Now they're both dead. Found in their own homes, naked, in a bath full of paint. Apparent victims of an army man. A loner, a smart guy with a score to settle, a ruthless vigilante. A man just like Jack Reacher.

"'Reacher is as dyed-in-the-wool an American action man as Hollywood could hope for...manages that tough trick of seeming at once battle-hardened, footloose, sexy and compassionate: the sort of ladies' man that Peter Millar, The Times" * The Times *
"'Within a short space of time, Child has gleaned enviable recognition for his tautly written thrillers...This tale will ensure that many a train stop is missed'" * The Good Book Guide *
"'In three novels Lee Child has established a franchise with his maverick drifter, the ex-US military cop Jack Reacher, and shown that, for an Englishman, he can produce passable American. His fourth, The Visitor, offers an efficient mix of hard-boiled style with lots of lip and a revivial of the classic locked-room mystery...Tight plotting, pace and high mileage'" * Guardian *
"'Relentlessly fast-paced and beautifully structured...Amply fulfils the promise of its predecessors. Reacher is the sort of hero no woman could help falling for, and he looks destined to have a very long life'" * Daily Mail *
"'A thumping good read...This is an excellent thriller of the Patricia Cornwell variety. Gripping and well-constructed...Impossible to put down'" * Daily Express *

Lee Child is one of the world's leading thriller writers. He was born in Coventry, raised in Birmingham, and now lives in New York. It is said one of his novels featuring his hero Jack Reacher is sold somewhere in the world every nine seconds. His books consistently achieve the number-one slot on bestseller lists around the world, and are published in over one hundred territories. He is the recipient of many prizes, most recently the CWA's Diamond Dagger for a writer of an outstanding body of crime fiction. Jack Reacher, the first Jack Reacher movie starring Tom Cruise, was based on the novel One Shot, and the second is Jack Reacher: Never Go Back.

GOR000998683
The Visitor: (Jack Reacher 4) by Lee Child
Lee Child
Jack Reacher
Used - Very Good
Paperback
Transworld Publishers Ltd
2001-02-03
512
0553811886
9780553811889
N/A
Book picture is for illustrative purposes only, actual binding, cover or edition may vary.
This is a used book - there is no escaping the fact it has been read by someone else and it will show signs of wear and previous use. Overall we expect it to be in very good condition, but if you are not entirely satisfied please get in touch with us.