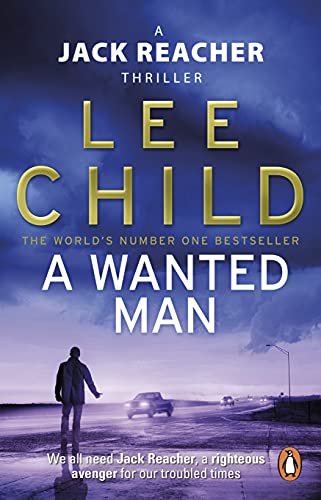 A Wanted Man
by Lee Child

In Stock
£3.59
Accept no substitutes' Mick Herron'A fascinating, swaggeringly confident performance' Sunday Times'Smart, breathless' New York Times_____________________When you're as big and rough as Jack Reacher - and you have a badly set, freshly busted nose - it isn't easy to hitch a ride in Nebraska.
Very Good Good
175 in stock

'There's only one Jack Reacher. Accept no substitutes' Mick Herron 'A fascinating, swaggeringly confident performance' Sunday Times 'Smart, breathless' New York Times _____________________ When you're as big and rough as Jack Reacher - and you have a badly set, freshly busted nose - it isn't easy to hitch a ride in Nebraska. At last, he's picked up by three strangers - two men and a woman. Within minutes it becomes clear they're all lying about everything - and there's a police roadblock ahead. There has been an incident, and the cops are looking for the bad guys . . . Will they get through because the three are innocent? Or because the three are now four? Is Reacher just a decoy? Although the Jack Reacher novels can be read in any order, A Wanted Man follows on directly from the end of Worth Dying For.

"I love him. It's said that a Jack Reacher novel is bought every four seconds somewhere in the world. He is to crime fiction what Clint Eastwood's 'man with no name' was to the western. Lee Child's genius in 17 novels has been to create a tough guy hero that men will envy and women will adore." * Daily Express *
"Pure escapism...He has redefined the thriller for the 21st century...Reacher is a knight errant every bit as much as Raymond Chandler's Philip Marlowe was. ...stunningly good." -- Henry Sutton * Daily Mirror *
"I am no longer (if I ever was) an unbiased critic. I am more of a Lee Child fan. I am pro-Reacher, his massive but benevolent brute of a drifter, vigilante hero....I'll definitely barrel through the next one too." -- Andy Martin * Independent *
"Smart, breathless...more ingenious than other Reacher books have been about the underground activities Reacher is thwarting." -- Janet Maslin * New York Times *
"A fascinating, swaggeringly confident performance" * Sunday Times *