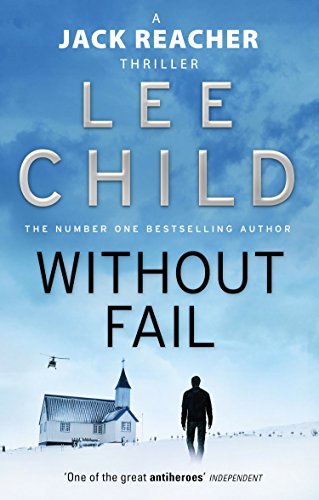 Without Fail
by Lee Child

Protecting the Vice-President of the United States.

Featuring Jack Reacher, hero of the new blockbuster movie starring Tom Cruise. This time, he's in the line of fire, protecting the Vice President of the United States.

No job, no ID, no last known address. But he never turns down a plea for help. Now a woman tracks him down. A woman serving at the very heart of US power. A woman who needs Reacher's assistance in her new job.

Protecting the Vice-President of the United States.

Someone wants the VP dead.

'Lee Child writes edgy American thrillers to rival the likes of Thomas Harris and John Grisham' * The Mirror *
'Sixth in seriously good series featuring Jack Reacher...Exciting, absorbing and intriguing, with hero big and bold enough to handle the percussive action' * Literary Review *
'A good, edge-of-the-seat thriller' * Punch *
'Jack Reacher is a most magnetic creation, tough, cool and ultimately moral' * Irish Independent *
'Lee Child's protagonist, Jack Reacher, is a hero in the Dirty Harry style, a man who lives by his own principles...Produces a surprising twist when it's least expected' * Sunday Telegraph *

Jack Reacher walks alone. No job, no ID, no last known address. But he never turns down a plea for help. Now a woman tracks him down, because she needs a break with her new job. Her task? Protecting the Vice President of the United States. From someone threatening to kill him. And so Reacher, with nothing but his toothbrush and the clothes he stands up in, enters a very exclusive club at the very heart of Washington power: the offices of the United States Secret Service. Here he must literally put himself in the line of fire, pitting his native cunning, surly charm and instinctive but controlled violence against the wiliness of bureaucrats and the ghosts from his own past - as well as the brutal ruthlessness of the mystery assassin. Without Fail is Lee Child's sixth thriller, another brillantly plotted, romantic and nail-bitingly exciting story featuring Jack Reacher, a hero whose toughness, coolness, and sheer animal magnetism just grow more irresistible with every book.

GOR008792392
Without Fail: (Jack Reacher 6) by Lee Child
Lee Child
Jack Reacher
Used - Like New
Paperback
Transworld Publishers Ltd
2003-04-01
592
0553813439
9780553813432
Short-listed for WH Smith Thumping Good Read Book Award 2003 Short-listed for WH Smith Thumping Good Read Award 2003 Short-listed for CWA Ian Fleming Steel Dagger 2002
Book picture is for illustrative purposes only, actual binding, cover or edition may vary.
The book has been read, but looks new. The book cover has no visible wear, and the dust jacket is included if applicable. No missing or damaged pages, no tears, possible very minimal creasing, no underlining or highlighting of text, and no writing in the margins.