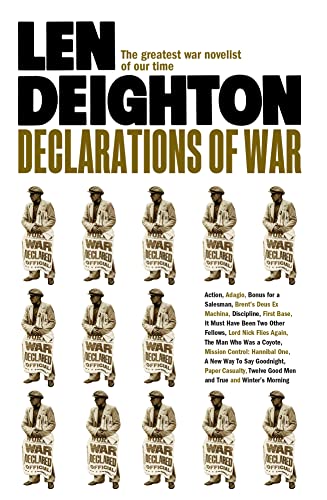 From Hannibal's march on Rome - when strange, moving objects terrorise the troops of one of the toughest and most skilful armies in history - to the efforts of a belittled Civil War general to get his men to face the Confederate army; to the dawn skies above an artillery-blasted French battle-line where a dogfight unfolds, to Vietnam; where two lost American soldiers stumble across an abandoned military airfield. A bonus story, new to this edition, reveals a very different kind of war, played out in the present-day Mexican borderlands.

Each story in Declarations of War explores the effects of war upon man's character, how it pushes him to act in a dehumanized, machine-like way, often leading to extraordinary deeds, both good and ill. It portrays human conflict through a series of devastating experiences and shows how great deeds are often but the smallest thread in the large fabric of war.

'As in all Mr Deighton's books, the incidental detail is impeccable: as well as the hardware, military idioms, superstitions and attitudes are convincing.' Financial Times

'The stories are written with economy and grace. They're highly readable and succeed in passing on to the reader... the fascination the author clearly feels for examining life lived at an extreme. His wars are often exciting, sometimes eerie, always sad.' Evening Standard

'They show an acute understanding of how men behave under stress, and when action is involved it comes across jabbingly and persuasively.' Listener

GOR011341937
9780008162221
0008162220
Declarations of War by Len Deighton
Len Deighton
Used - Very Good
Paperback
HarperCollins Publishers
20160922
224
null null null null null null null null null null
Book picture is for illustrative purposes only, actual binding, cover or edition may vary.
This is a used book - there is no escaping the fact it has been read by someone else and it will show signs of wear and previous use. Overall we expect it to be in very good condition, but if you are not entirely satisfied please get in touch with us
Trustpilot