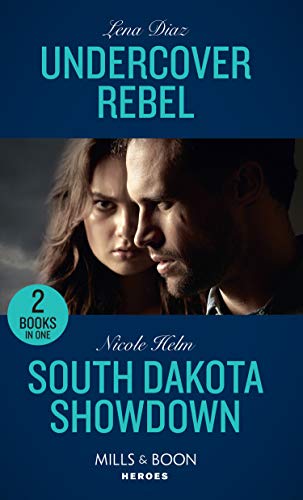 He must keep his true identity a secret.

He must keep his true identity a secret.

Shannon Murphy has no idea her neighbour is an undercover Homeland Security agent working to break up a human trafficking ring. Ian McKenzie wants to keep it that way. Until the mission goes wrong, plunging Shannon into mortal danger. After keeping secrets, can Shannon trust Ian with her life?

He finally escaped his past...now she's back.

Sheriff Jamison Wyatt has spent his life helping people elude his father's ruthless gang, the Sons of the Badlands. But now Liza Dean, 'the one who got away', is back and needs his help to rescue her sister from the gang. With only each other can they infiltrate the crime syndicate before it's too late?

Lena was born in Kentucky and has also lived in California, Louisiana, and Florida where she now resides with her husband and children. Before becoming a romantic suspense author, she was a computer programmer. A former Romance Writers of America's Golden Heart (R) finalist, she also won the Daphne du Maurier award. She loves to watch action movies, garden, or hike in the beautiful Tennessee Smoky Mountains. Nicole Helm writes down-to-earth contemporary romance and fast-paced romantic suspense. She lives with her husband and two sons in Missouri. Visit her website: www.nicolehelm.com

GOR010753866
Undercover Rebel / South Dakota Showdown: Undercover Rebel (The Mighty McKenzies) / South Dakota Showdown (A Badlands Cops Novel) (Mills & Boon Heroes) by Lena Diaz
Lena Diaz
Used - Like New
Paperback
HarperCollins Publishers
2020-02-06
448
0263280225
9780263280227
N/A
Book picture is for illustrative purposes only, actual binding, cover or edition may vary.
The book has been read, but looks new. The book cover has no visible wear, and the dust jacket is included if applicable. No missing or damaged pages, no tears, possible very minimal creasing, no underlining or highlighting of text, and no writing in the margins.