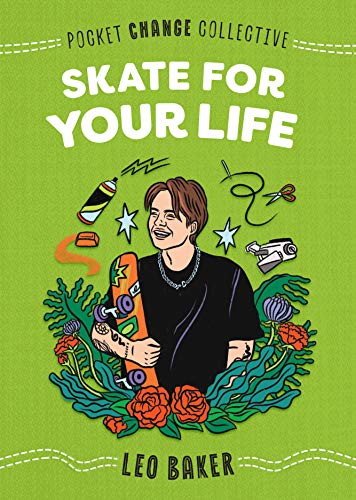 Skate for Your Life by Leo Baker

Skate for Your Life by Leo Baker

Pocket Change Collective was born out of a need for space. Space to think. Space to connect. Space to be yourself. And this is your invitation to join us.

Wow! Leo's vulnerability and authenticity allowed me to experience his pain and triumph. A great testament to the positive power of skateboarding and the dangers of gender. --Elissa Steamer (skateboarding pioneer)

In Skate for Your Life, Leo Baker invites us on the intimate journey toward self-realization. Leo's deep passion for skateboarding is beautifully communicated while bringing to light the difficult reality of breaking the mold on a public stage. This book synthesizes what so many LGBTQIA people can relate to--the lifelong journey of seeking out spaces where we fit in, and when we don't find them, making new ones. --JD Samson (musician, producer, and songwriter)

In this moving, personal story, professional skateboarder Leo Baker shares their journey within the sport and the importance of authenticity and allyship as a non-binary athlete.

Pocket Change Collective is a series of small books with big ideas from today's leading activists and artists.

Your authenticity is your superpower. That's the motto that professional skateboarder Leo Baker lives by and champions. But like any hero's journey, learning about their power didn't come easy. In this installment of the Pocket Change Collective, Baker takes the reader on a complicated, powerful journey through the world of skate and competitive sport as a non-binary athlete.
Leo Baker is one of the most iconic skateboarders in the world.

A staple at the X Games, Leo took their abilities to Street League for back-to-back victories in 2016 and 2017. Their work has been featured on outlets like Thrasher, ESPN, Vice, Nike's 30th Anniversary Just Do It Campaign, New York Times Magazine, Rolling Stone, Vogue, and more. In 2019, they founded the NYC Skate Project, which is an effort to shift the dynamics in skateboarding and create a safe space for non-male skaters to build community with one another. Their undying commitment to themselves and their scene has earned them global adoration from fans and friends both near and far.

Ashley Lukashevsky is an illustrator and visual artist born and raised in Honolulu, Hawaii, currently based in Los Angeles. Ashley uses illustration and art as tools to strengthen social movements against systemic racism, sexism, and anti-immigrant policy. She aims to tear down these systems of oppression through first envisioning and drawing a world without them.

Her clients include Refinery29, Broadly, The Washington Post, Planned Parenthood, Girls Who Code, GOOD Magazine, Brooklyn Magazine, ACLU, Red Bull, Snapchat, Air Jordan, and Logo TV.
NPB9780593223475
9780593223475
0593223470
Skate for Your Life by Leo Baker
Leo Baker
Pocket Change Collective
New
Paperback
Penguin Putnam Inc
20210601
64
N/A
Book picture is for illustrative purposes only, actual binding, cover or edition may vary.
This is a new book - be the first to read this copy. With untouched pages and a perfect binding, your brand new copy is ready to be opened for the first time
Trustpilot