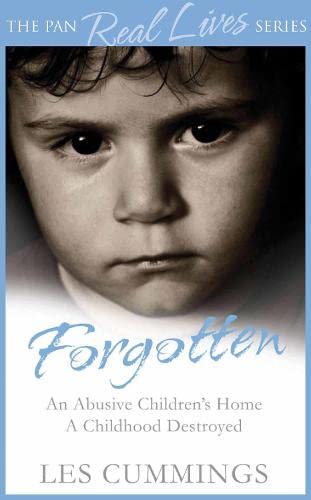 The powerful and moving story of a little boy who suffered and survived unimaginable abuse.

Forgotten: The Heartrending Story of Life in a Children's Home by Les Cummings

Les Cummings was three when he was sent to the Children's Cottage Homes in Portsmouth. A traumatised little boy, he dreamed his mother would come back for him. She never did. Instead he fell victim to the worst abusers and a system that didn't care.

Conditions at the home were harsh, the children poorly fed and hungry, dressed in stained second-hand clothes. But worse than that was the violence from some of the staff - Les was frequently punched, kicked and locked in the cellar as punishment. Children were dragged out of bed at night to be abused. Some simply disappeared. At the age of seven Les was sent to live with foster parents where for over two years he was beaten, starved and sexually abused. He stole food from dustbins to survive and became so disturbed he was sent back to the harsh regime of the children's home. He was fostered again as a teen, to another abuser.

Writing with complete honesty, Les describes how he came to terms with the terrible legacy of his childhood and how, today, he is fighting for justice for all victims of the Children's Cottage Homes.

Les Cummings set up the Children's Homes Justice Project in 2005, to help his fellow victims in their battle with Portsmouth Council and to advise other victims of abuse on taking legal action.
GOR001131670
9780330466875
0330466879
Forgotten: The Heartrending Story of Life in a Children's Home by Les Cummings
Les Cummings
Used - Very Good
Paperback
Pan Macmillan
2008-11-07
336
N/A
Book picture is for illustrative purposes only, actual binding, cover or edition may vary.
This is a used book - there is no escaping the fact it has been read by someone else and it will show signs of wear and previous use. Overall we expect it to be in very good condition, but if you are not entirely satisfied please get in touch with us
Trustpilot