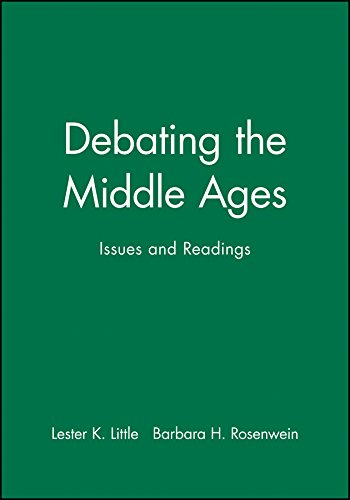 Used Price
£16.49
New RRP £56.75
Free Shipping in the UK
Brings together work in the field of medieval history. This book provides an overview of medieval historiography, demonstrating that history is not a collection of static facts, but rather a dynamic process of interpretation. It is structured thematically under four key areas of scholarly discussion.
Very Good

This book brings together some of the most original and influential recent work in the field of medieval history. It provides a stimulating overview of current medieval historiography, demonstrating that history is not a collection of static facts, but rather a dynamic process of interpretation. This book is structured thematically under four key areas of scholarly discussion. Chapter 1, 'The Fate of Rome's Western Provinces' explores current thinking about the age that used to be called the 'decline of Rome'. Chapter 2, 'Feudalism and Its Alternatives', examines the debate on the very term' feudalism', which some historians would like to jettison altogether. The discussion in Chapter 3, 'Gender', turns to the rich array of studies about women (and men as defined as a gender category) that have been written in the last 20 years. In the final chapter, 'Religion and Society', the book highlights new ways in which medieval historians are connecting religious phenomena as diverse as formal doctrine, belief in miracles, and liturgical proliferations to transformations and preoccupations within secular society. Each section comprises an introduction by the editors, discussing the significance of the topic and the history of its interpretation. There follows, for each, five to six readings from books or articles that reflect some of the most important current scholarship in the field. Several pieces are here translated into English for the first time.

"Rosenwein and Little have produced an extraordinarily broad and intelligent guide to the major debates in medieval history of the past decades. Not only are the selections well chosen, but their introductions are the best surveys of contemporary medieval historiography available in any language." Patrick J. Geary, Director, University of Notre Dame "Debating the Middle Ages will be a uniquely valuable book for beginning and advanced students, for teachers, and for scholars. By prefacing reprints or translations of important recent articles on four broad problems in medieval history with lucid, well-annotated analyses of how debates on each of the four problems has proceeded, Little and Rosenwein provide a superb introduction to the ways in which historians today are studying, arguing about, and reinventing medieval European history." Stephen D. White, Professor of Medieval History "Little and Rosenwein have assembled an impressive selection of essays, incorporating some of the most original and influential recent works in the field of medieval history." Economic History Review "Compilations such as this one will ensure that medieval studies remain intellectually vibrant by encouraging students of the subject to reflect critically upon the forces and ideas that have shaped, and continue to shape, the discipline ... I believe it will prove to be an indispensable tool for both teachers and students in the future." Comitatus

Barbara H. Rosenwein is Professor of History at Loyola University Chicago. Her previous publications include To Be the Neighbor of Saint Peter (1989). She has recently completed a book on early medieval political culture and strategies, Negotiating Space: Early Medieval Immunities and Other Entry Prohibitions (1999).

Lester K. Little is Dwight W. Morrow Professor of History at Smith College, Northampton, Massachusetts. He previously taught at Princeton University and the University of Chicago. His most recent publication is Benedictine Maledictions: Liturgical Cursing in Romanesque France (1993).

Editors' Acknowledgments. Acknowledgements of Sources.A Note on Format. List of Abbreviations. Introduction. Part I: The Fate of Rome's Western Provinces: 1 Conceptions of Ethnicity in Early Medieval Studies: Walter Pohl.2. The Barbarians in Late Antiquity and How They Were Accommodated in the West: Walter Goffart. 3. The Fall of Rome will not Take Place: Chris Wickham. 4. Richard Hodges and David Whitehouse, The Decline of the Western Empire: Richard Hodges and David Whitehouse. 5. Gregory of Tours and Clovis: Ian N. Wood. 6. Missionaries and Magic in Dark-Age Europe: Alexander Murray. Part II: Feudalism and Its Alternatives: 7. The Banal Seigneurie and the "Reconditioning" of the Free Peasantry: Pierre Bonnassie. 8. The Year 1000 without Abrupt or Radical Transformation: Domnique Barthelemy. 9. The Tyranny of a Construct: Feudalism and Historians of Medieval Europe: Elizabeth A. R. Brown. 10. Giving Each his Due: Frederic L. Cheyette. 11. Strangers and Neighbours: Monique Bourin and Robert Durand. 12. Amicitiae [Friendships] as Relationships between States and People: Gerd Althoff. Part III: Gender: 13. Queens as Jezebels: the careers of Brunhild and Balthild in Merovingian History: J. L. Nelson. 14. Women and the Norman Conquest: Pauline Stafford. 15. The "Cruel Mother": Maternity, Widowhood, and Dowry in Florence in the Fourteenth and Fifteenth Centuries: Christine Klapisch-Zuber. 16. Men's Use of Female Symbols: Caroline Walker Bynum. 17. Burdens of Matrimony: Husbanding and Gender in Medieval Italy: Susan Mosher Stuard. Part IV: Religion and Society: 18. The Evangelical Awakening: Marie-Dominique Chenu. 19. The Use and Abuse of Miracles in Early Medieval Culture: Sofia Boesch Gajano. 20. The Dead in the Celestial Book-Keeping of the Cluniac Monks around the Year 1000: Dominiques Iogna-Prat. 21. Literacy and the Making of Heresy, c. 1000-c. 1150: Robert I. Moore. 22. Folklore and Society in the Medieval West: Jean-Claude Schmitt. Index of Persons and Places.

GOR002455981
Debating the Middle Ages: Issues and Readings by Lester K. Little
Lester K. Little
Used - Very Good
Paperback
John Wiley and Sons Ltd
1998-08-07
410
1577180089
9781577180081
N/A
Book picture is for illustrative purposes only, actual binding, cover or edition may vary.
This is a used book - there is no escaping the fact it has been read by someone else and it will show signs of wear and previous use. Overall we expect it to be in very good condition, but if you are not entirely satisfied please get in touch with us.