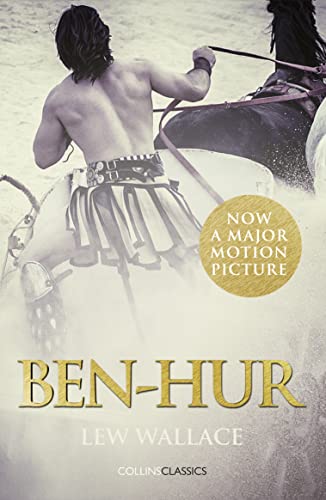 `The happiness of love is in action; its test is what one is willing to do for others.'

In first-century Judea, Jewish prince Judah Ben-Hur is falsely accused of assassinating a Roman governor, and sentenced to life as a galley slave. His fortunes are reversed when he saves the captain's life and he returns, determined to seek his revenge against those who have brought misfortune to both himself and his family. His life becomes intertwined with that of Christ's, and after witnessing His teachings and eventual crucifixion Ben-Hur discovers the redemptive power of forgiveness.

The bestselling American novel of the nineteenth century, `Ben-Hur' had never been out of print on the hundredth anniversary of its publication in 1980. After numerous stage and film adaptations, it remains hugely influential today, and is soon to be a new major adaptation.

`Compared with other romances . . . Ben-Hur easily passes them all, by a vitality which has a touch of genius.' Carl Van Doren

Lewis Wallace, born in Indiana in 1827, was an American lawyer, general in the American Civil War, governor, politician, diplomat and author. Before his death in 1905 he wrote numerous novels and biographies, but is most famous for his second novel, `Ben-Hur' (1880), a bestseller that is often referred to as the `most influential Christian book of the nineteenth century'.

GOR007704863
9780008124106
0008124108
Ben-Hur by Lew Wallace
Lew Wallace
Used - Very Good
Paperback
HarperCollins Publishers
2016-06-20
480
N/A
Book picture is for illustrative purposes only, actual binding, cover or edition may vary.
This is a used book - there is no escaping the fact it has been read by someone else and it will show signs of wear and previous use. Overall we expect it to be in very good condition, but if you are not entirely satisfied please get in touch with us
Trustpilot