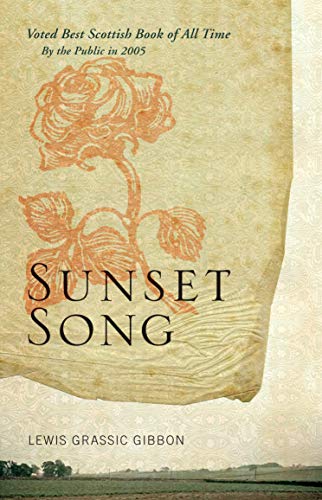 Used Price
£5.99
New RRP £7.99
Free Shipping in the UK
Sunset Song is the first and most celebrated of Grassic Gibbon's great trilogy, A Scot's Quair. It is hard to find any other Scottish novel of the last century which has received wider acclaim and better epitomises the feelings of a nation.
Reviews:
Trustpilot
Very Good Good Well Read

Sunset Song is the first and most celebrated of Grassic Gibbon's great trilogy, A Scot's Quair. It provides a powerful description of the first two decades of the century through the evocation of change and the lyrical intensity of its prose. It is hard to find any other Scottish novel of the last century which has received wider acclaim and better epitomises the feelings of a nation.

This book may be read with delight the world over. * * New York Times * *
It is gritty and passionate and one of Scotland's great 20th-century novels -- Jim Naughtie * * Daily Express * *
Beautifully written novel about a rural Scottish community facing the acute changes wrought by the First World War. While describing a way of life in decline, it also presents a vision of hope for the future via its strong female lead character. * * Independant on Sunday * *

James Leslie Mitchell, 'Lewis Grassic Gibbon' (1901-35), was born and brought up in the rich farming land of Scotland's north-east coast. After a brief journalistic career, he joined the Royal Army Service Corps in 1919, serving in Persia, India and Egypt before he spent six years as a clerk in the RAF. He married Rebecca Middleton in 1925 and became a full-time writer in 1929. He was a prolific writer of novels, short stories and essays and had seventeen full-length books published before his untimely death at the age of thirty-four. He adopted his maternal grandmother's name for his Scottish work including A Scots Quair: Sunset Song, Cloud Howe and Grey Granite. An unfinished novel, The Speak of the Mearns, was published posthumously in 1982.

GOR001396824
Sunset Song by Lewis Grassic Gibbon
Lewis Grassic Gibbon
Used - Very Good
Paperback
Canongate Books Ltd
2006-03-30
286
1841957569
9781841957562
N/A
Book picture is for illustrative purposes only, actual binding, cover or edition may vary.
This is a used book - there is no escaping the fact it has been read by someone else and it will show signs of wear and previous use. Overall we expect it to be in very good condition, but if you are not entirely satisfied please get in touch with us.