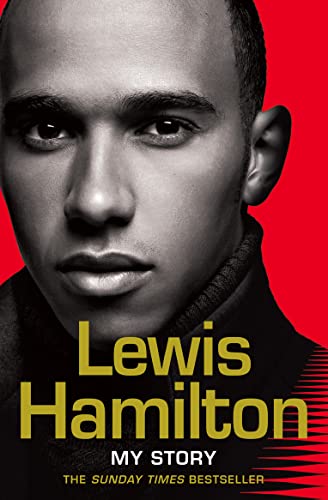 Lewis Hamilton's explosive arrival on the Formula 1 scene has made front-page headlines. In My Story, for the first time Lewis opens up about his stunning debut season in grand prix racing, as well as his dad Anthony, his home life and his early years. The only book with the real story, as told by Lewis.

Lewis Hamilton's explosive arrival on the Formula 1 scene has made front-page headlines. In My Story, for the first time Lewis opens up about his stunning debut season in grand prix racing, as well as his dad Anthony, his home life and his early years. The only book with the real story, as told by Lewis.

In his first season in F1, Lewis Hamilton thrilled the world of motor racing by finishing on the podium in his first nine consecutive races - the first driver to do so in the sport's 57-year history - and drove to victories in Canada, America, Hungary and Japan. But bare statistics alone do scant justice to the amazing impact Lewis Hamilton has had on the sporting landscape. My Story gives the real account from Lewis himself, as he sets the record straight about his colourful life on and off the track.

Given a grounded upbringing by his dedicated father in unremarkable Stevenage, Lewis tells about how he first tried out go-karting while on a cut-price family holiday in Ibiza. In his book he gives the real version of events at a motor sport dinner where, as a nine-year-old wearing a borrowed suit, he approached McLaren team boss Ron Dennis with the immortal words that were to change his life forever.

He rose rapidly through the Junior and Formula ranks, dominating every series with his raw speed and canny race craft. Here Lewis candidly recalls those key moments that shaped his career and went some way towards compensating for the sacrifices made by his father Anthony in getting his son to the top.

Lewis also charts how he got into the sport and was signed up by Ron Dennis, what motivates him, who are his closest friends, how he copes with the constant travelling, and the physical and mental challenges of driving a state-of-the-art Formula 1 car. He looks back in detail at the 2007 World Championship - the race wins, the frightening crash in Germany, his intense rivalry with team-mate Fernando Alonso, his special relationship with Ron Dennis, and the furore over the Ferrari allegations - right up to the dramatic last race of the season in Brazil.

`Lewis will create the benchmark for a whole generation of drivers...He is already turning television viewers back on to motor racing' Jackie Stewart

Few 22-year-olds have achieved enough to warrant 290 pages of reminiscence, but Hamilton is the exeption.' 'Hamilton is not only outstandingly gifted as a racing driver, he is genuinely articulate and charming.' The Daily Telegraph

Lewis Hamilton was born in Stevenage, Hertfordshire in January 1985. By the age of eight he was racing karts, at ten he drove to his first British championship, and at thirteen he was signed to the McLaren team. He made his F1 debut at the 2007 Australian GP and won in Canada, USA, Hungary and Japan during that season, finishing second in the World Driver's Championship.

GOR000696737
9780007270064
0007270062
Lewis Hamilton: My Story by Lewis Hamilton
Lewis Hamilton
Used - Very Good
Paperback
HarperCollins Publishers
2008-03-17
336
N/A
Book picture is for illustrative purposes only, actual binding, cover or edition may vary.
This is a used book - there is no escaping the fact it has been read by someone else and it will show signs of wear and previous use. Overall we expect it to be in very good condition, but if you are not entirely satisfied please get in touch with us
Trustpilot