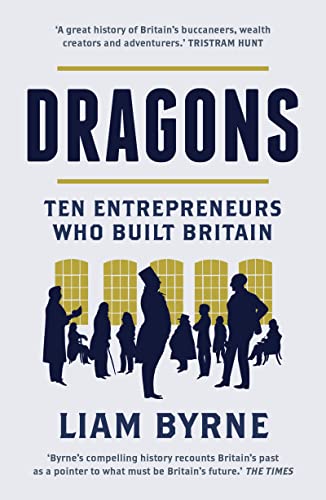 The inspiring stories of ten great British entrepreneurs from the Elizabethan age to the present - how their genius made Britain great and shaped the global marketplace.

Britain's rise to global dominance from the 16th century onwards owed as much to the vision and creative energies of traders, merchants, industrialists and bankers as it did to wars of conquest fought by empire-building military men.

Dragons tells the story of British business endeavour through the lives of ten titans of commerce. Beginning with the Tudor merchants who transformed England's economy via trade with the New World, Liam Byrne traces a golden line of British entrepreneurial genius through men such as Thomas Pitt, saviour of the East India Company; financier Nathan Rothschild, creator of the modern bond market; 'ethical capitalist' George Cadbury; and William Lever, brand-builder, philanthropist, and creator of Britain's first great multinational.

At the start of the 21st century Britain remains a major economic power. Dragons is both a rousing celebration of British business acumen and a fascinatingly informative narrative of a neglected but essential strand of our island's story.

'A great history of Britain's buccaneers, wealth creators and adventurers ... Brilliantly connects past to present' Tristram Hunt.
'[A] whistle-stop account of some of Britain's greatest entrepreneurs and deal-makers ... Leaves you longing to know more' The Times.
'Liam Byrne's compelling history recounts Britain's past as a pointer to what must be Britain's future' Phil Collins, The Times.
'Written with infectious enthusiasm, Dragons brings to new perspectives on Britain's entrepreneurs. Economic history needs such a fresh and original approach' Sir Roderick Floud, co-editor, Cambridge Economic History.

Rt Hon Liam Byrne MP is a former Cabinet minister, writer and reformer. A technology entrepreneur before entering politics, he was a Fulbright Scholar at the Harvard Business School.

GOR008794969
9781781857496
1781857490
Dragons: Ten Entrepreneurs Who Built Britain by Liam Byrne
Liam Byrne
Used - Very Good
Paperback
Head of Zeus
2017-07-13
496
N/A
Book picture is for illustrative purposes only, actual binding, cover or edition may vary.
This is a used book - there is no escaping the fact it has been read by someone else and it will show signs of wear and previous use. Overall we expect it to be in very good condition, but if you are not entirely satisfied please get in touch with us
Trustpilot