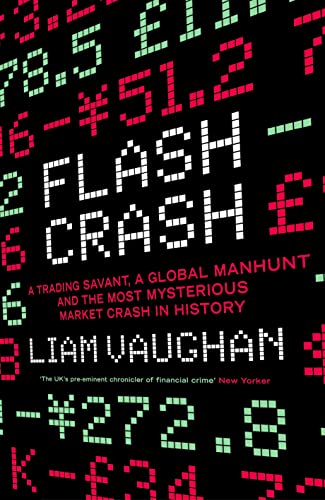 Flash Crash: A Trading Savant, a Global Manhunt and the Most Mysterious Market Crash in History by Liam Vaughan

'Not just a readable, pacey account of an extraordinary individual and his quixotic quest for money he didn't even spend, but also a troubling expose of the fragility of our entire financial system ... I loved it'
Oliver Bullough, author of Moneyland

For fans of Bad Blood and Flash Boys, the story of a trading prodigy who amassed $70 million from his childhood bedroom-until the US government accused him of helping trigger an unprecedented market collapse.

On May 6, 2010, financial markets around the world tumbled simultaneously and without warning. In the span of five minutes, a trillion dollars of valuation was lost. The Flash Crash, as it became known, represented the fastest drop in market history. When share values rebounded less than half an hour later, experts around the globe were left perplexed. What had they just witnessed?

Navinder Singh Sarao hardly seemed like a man who would shake the world's financial markets to their core. Raised in a working-class neighbourhood in West London, Nav was a preternaturally gifted trader who played the markets like a computer game. By the age of thirty, he had left behind London's trading arcades, working instead out of his childhood home. For years the money poured in. But when lightning-fast electronic traders infiltrated markets and started eating into his profits, Nav built a system of his own to fight back. It worked-until 2015, when the FBI arrived at his door. Depending on whom you ask, Sarao was a scourge, a symbol of a financial system run horribly amok, or a folk hero-an outsider who took on the tyranny of Wall Street and the high-frequency traders.

A real-life financial thriller, Flash Crash uncovers the remarkable, behind-the-scenes narrative of a mystifying market crash, a globe-spanning investigation into international fraud, and the man at the centre of them both.

'This is not just a readable, pacey account of an extraordinary individual ... but also a troubling expose of the fragility of our entire financial system ... I loved it'
Oliver Bullough, author of Moneyland

'The definitive account of one of the most mysterious events in the recent history of financial markets ...Tells the irresistible personal tale of the unlikely character-finance whiz, social misfit, brazen cheater, folk hero, fraud victim-who finds himself at the centre of a vast global scandal'
David Enrich

'An elegant and fast-paced narrative ... Through meticulous reporting and a gripping story, Vaughan has filled in many of the missing pieces. You won't be able to put it down.'
William D. Cohan

'A cautionary tale of the fragilities baked into the financial system ... An engaging history lesson on the evolution of modern trading ... And it is a pacy account that swings from humour to horror of a vulnerable man who is out of his depth ... Compelling'
Financial Times

'Extraordinary ... vivid detail ... The real bandits are still out there, cloaked in political cover and respectability yet rigging the markets at scale'
Wall Street Journal

'So compelling ... He brings out the moral subtleties. It isn't a simple story of good versus evil ... Tells the story beautifully'
Daily Mail, Book of the Week

Liam Vaughan is an award-winning investigative journalist and author with Bloomberg and Businessweek magazine.

GOR010603702
Flash Crash: A Trading Savant, a Global Manhunt and the Most Mysterious Market Crash in History by Liam Vaughan
Liam Vaughan
Used - Very Good
Hardback
HarperCollins Publishers
2020-05-14
272
0008270392
9780008270391
N/A
Book picture is for illustrative purposes only, actual binding, cover or edition may vary.
This is a used book - there is no escaping the fact it has been read by someone else and it will show signs of wear and previous use. Overall we expect it to be in very good condition, but if you are not entirely satisfied please get in touch with us.