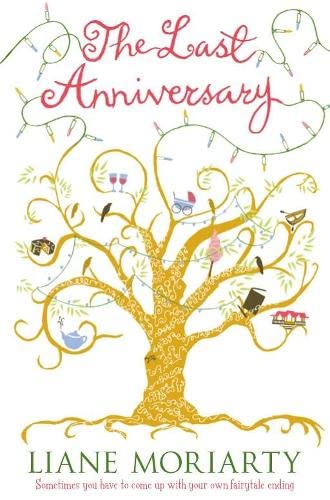 The Last Anniversary
by Liane Moriarty

In Stock
£3.59
Sometimes you have to come up with your own fairytale ending
Very Good
Only 2 left

The Last Anniversary by Liane Moriarty

`I'll tell you something, something important. Love is a decision. Not a feeling. That's what you young people don't realise. That's why you're always off divorcing each other. No offence, dear.'

So decrees the formidable Connie Thrum of Scribbly Gum Island. She is the chief decision-maker of a rather unconventional family and her word is law, especially when it comes to the important things in life, like cinnamon toast and profit margins.

It's been over seventy years since Connie and her sister Rose visited their neighbours and found the kettle boiling and a baby waking for her feed, but no sign of her parents. The `Munro Baby Mystery' still hasn't been solved and tourists can visit the abandoned home, exactly as it was found in 1932.

But now Connie has passed away and the island residents ponder her legacy. Sophie Honeywell is looking down the barrel of her fortieth birthday and still hoping for that fairytale ending. Her beautiful new friend Grace, the Munro Baby's granddaughter, can't tell anyone what she hopes for. It would be too shocking.

Meanwhile, a frumpy housewife makes a pact with a stranger, an old lady starts making her own decisions and a family secret finally explodes on an extraordinary night of mulled wine, fire-eating and face-painting - the Last Anniversary.

"Moriarty has taken chick lit to a new level with her clever, engrossing THE LAST ANNIVERSARY." -- Cleveland Plain Dealer

The eldest of six children, Liane Moriarty is the author of the bestseller THREE WISHES. She is a freelance advertising copywriter based in Sydney. She writes everything from catalogues to websites, TV commercials to cereal boxes and has won industry awards for her work. She lives by the sea with her partner, Eric.

GOR001142998
The Last Anniversary by Liane Moriarty
Liane Moriarty
Used - Very Good
Paperback
Pan Macmillan
2006-10-06
400
0330442317
9780330442312
N/A
Book picture is for illustrative purposes only, actual binding, cover or edition may vary.
This is a used book - there is no escaping the fact it has been read by someone else and it will show signs of wear and previous use. Overall we expect it to be in very good condition, but if you are not entirely satisfied please get in touch with us.