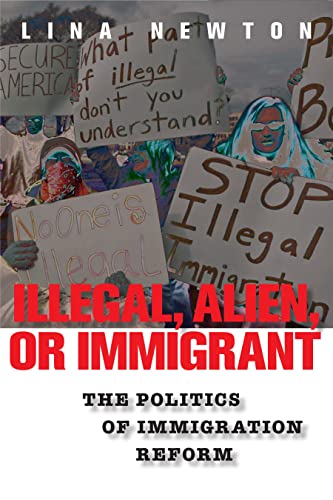 In Stock
£5.49
While the United States cherishes its identity as a nation of immigrants, the country's immigration policies are historically characterized by cycles of openness and xenophobia. In this book, the author carefully dissects the political debates over contemporary immigration reform.
Good
Only 1 left

Illegal, Alien, or Immigrant: The Politics of Immigration Reform by Lina Newton

While the United States cherishes its identity as a nation of immigrants, the country's immigration policies are historically characterized by cycles of openness and xenophobia. Outbursts of anti-immigrant sentiment among political leaders and in the broader public are fueled by a debate over who is worthy of being considered for full incorporation into the nation, and who is incapable of assimilating and taking on the characteristics and responsibilities associated with being an American.
In Illegal, Alien, or Immigrant, Lina Newton carefully dissects the political debates over contemporary immigration reform. Beginning with a close look at the disputes of the 1980s and 1990s, she reveals how a shift in legislator's portrayals of illegal immigrants from positive to overwhelmingly negative facilitated the introduction and passing of controversial reforms. Newton's analysis reveals how rival descriptions of immigrant groups and the flattering or disparaging myths that surround them define, shape, and can ultimately determine fights over immigration policy. Her pathbreaking findings will shed new light on the current political battles, their likely outcomes, and where to go from here.

Newton neatly overlays policy theories with arguably the most contentious domestic policy issue of our times, namely, how governments equitably and humanely resolve the issues of illegal immigration. As such, she importantly adds to a growing literature that sets out the political, cultural, and economic complexities of these debates. -- Peter deLeon,author of Democracy and the Policy Sciences
These arguments make significant contributions to the growing literature on the role of symbolic politics in immigration policy. Newton's book would be a stimulating and appropriate text for either upper-division or graduate courses. * Political Science Quarterly *
An important and fresh contribution to our understanding of the tropes and policies governing race, immigrants, and membership in America. Lina Newton develops a valuable set of theoretical claims and strong evidence to show how official and social constructions of particular groups shape immigration reform and power distributions more generally. -- Daniel J. Tichenor,author of Dividing Lines: The Politics of Immigration Control in America
This superb study of immigration politics marks an important step forward. Illegal, Alien, or Immigrant is an exemplary study of political discourse that shines a much-needed light on the divisive rhetoric that surrounds U.S. immigration policy today. -- Joe Soss,author of Unwanted Claims: The Politics of Participation in the U.S. Welfare System
Presents complex ideas in an admirably accessible fashion. * Choice *

GOR010305846
Illegal, Alien, or Immigrant: The Politics of Immigration Reform by Lina Newton
Lina Newton
Used - Good
Paperback
New York University Press
2008-08-10
240
0814758436
9780814758434
N/A
Book picture is for illustrative purposes only, actual binding, cover or edition may vary.
The book has been read but remains in clean condition. All pages are intact and the cover is intact. Some minor wear to the spine.