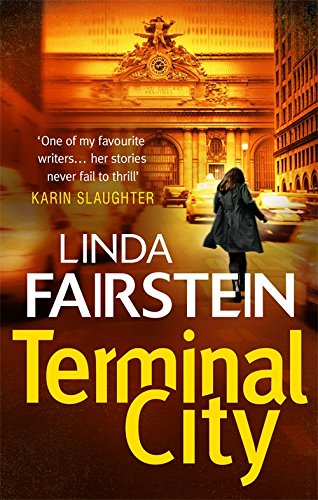 Grand Central Terminal is the very centre of the city. It's also the sixth most visited tourist attraction in the world. From the world's largest Tiffany clock decorating the Forty-Second Street entrance to using electric trains since the early 1900s, Grand Central has been a symbol of beauty and innovation in New York City for more than one hundred years.

But 'the world's loveliest station' is hiding more than just an underground train system, and in Terminal City, Alex Cooper and Mike Chapman must contend with Grand Central's dark secrets as well as their own changing relationship.

If it is authenticity you demand, Linda Fairstein has got it in spades...she delivers the other ingredients, too: engaging characters, an intelligent story full of twists and terrific tension - The Times

Linda Fairstein is a former prosecutor and one of America's foremost legal experts on crimes of violence against women and children. For three decades she served in the office of the New York County District Attorney, where she was Chief of the Sex Crimes Prosecution Unit.

In 2010 she was the recipient of the Silver Bullet Award from the International Thriller Writers association. Her Alexandra Cooper novels have been translated into more than a dozen languages and have debuted on the Sunday Times and the New York Times bestseller lists, among others. She lives in Manhattan and on Martha's Vineyard.

GOR006496994
Terminal City by Linda Fairstein
Linda Fairstein
Alexandra Cooper
Used - Very Good
Paperback
Little, Brown Book Group
2015-02-12
480
0751550485
9780751550481
Short-listed for Harper Lee Prize for Legal Fiction 2015 (UK)
Book picture is for illustrative purposes only, actual binding, cover or edition may vary.
This is a used book - there is no escaping the fact it has been read by someone else and it will show signs of wear and previous use. Overall we expect it to be in very good condition, but if you are not entirely satisfied please get in touch with us.