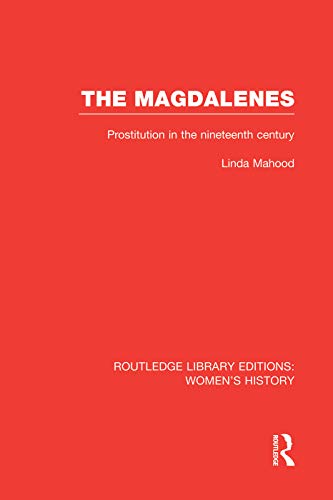 The Magdalenes
by Linda Mahood

The Magdalenes: Prostitution in the Nineteenth Century by Linda Mahood

The nineteenth century witnessed a discursive explosion around the subject of sex. Historical evidence indicates that the sexual behaviour which had always been punishable began to be spoken of, regulated, and policed in new ways. Prostitutes were no longer dragged through the town, dunked in lakes, whipped and branded. Medieval forms of punishment shifted from the emphasis on punishing the body to punishing the mind.

Building on the work of Foucault, Walkowitz, and Mort, Linda Mahood traces and examines new approached emerging throughout the nineteenth century towards prostitution and looks at the apparatus and institutions created for its regulation and control. In particular, throughout the century, the bourgeoisie contributed regularly to the discourse on the prostitution problem, the debate focusing on the sexual and vocational behaviour of working class women. The thrust of the discourse, however, was not just repression or control but the moral reform - through religious training, moral education, and training in domestic service - of working class women.

With her emphasis on Scottish 'magdalene' homes and a case study of the system of police repression used in Glasgow, Linda Mahood has written the first book of its kind dealing with these issues in Scotland. At the same time the book sets nineteenth-century treatment of prostitutes in Scotland into the longer run of British attempts to control 'drabs and harlots', and contributes to the wider discussion of 'dangerous female sexuality' in a male-dominated society.

Introduction: The Deployment of 'Dangerous' Female Sexualities Part 1: The Birth of Social Medicine and the State 1. 'Harlots, Witches and Bar-maids': Prostitution, Disease, and the State, 1497 - 1800 2. A Medical Model of Immorality: The Glasgow Lock Hospital 3. Familiarity with the Illicit Part 2: Philanthropy, Piety, and the State 4. An Invitation to Discourse 5. The Domestication of 'Fallen' Women 6. Friendless, Fallen and Inebriate Women: The Transformations Part 3: The Glasgow System: Police Repression or Veiled Regulation? 7. Fighting the 'Multitudinous Amazonian Army' 8. Police Repression or Veiled Regulation? Conclusion: Prostitutes, Magdalenes, and Wayward Girls: Dangerous Sexualities of Working-class Women

GOR009955107
The Magdalenes: Prostitution in the Nineteenth Century by Linda Mahood
Linda Mahood
Routledge Library Editions: Women's History
Used - Very Good
Paperback
Taylor & Francis Ltd
2014-04-10
212
0415752574
9780415752572
N/A
Book picture is for illustrative purposes only, actual binding, cover or edition may vary.
This is a used book - there is no escaping the fact it has been read by someone else and it will show signs of wear and previous use. Overall we expect it to be in very good condition, but if you are not entirely satisfied please get in touch with us.