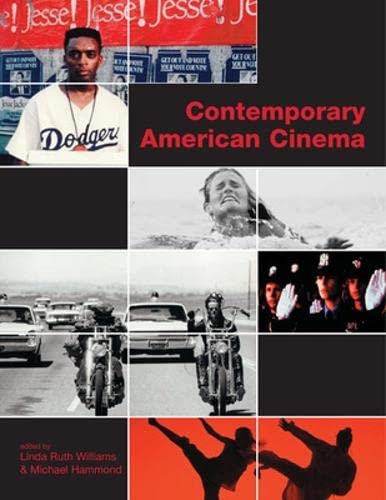 In Stock
£7.49
Contemporary American Cinema is the first comprehensive introduction to American cinema since 1960. Critical essays from leading film scholars are supplemented by boxed profiles of key directors, producers and actors; key films and key genres; and statistics from the cinema industry.
Very Good
Only 3 left

"One of the rare collections I would recommend for use in undergraduate teaching - the chapters are lucid without being oversimplified and the contributors are adept at analyzing the key industrial, technological and ideological features of contemporary U.S. cinema."
Diane Negra, University of East Anglia, UK.

"Contemporary American Cinema offers a fresh and sometimes revisionist look at developments in the American film industry from the 1960s to the present ... Readers will find it lively and provocative."
Chuck Maland, University of Tennessee, USA.

"Contemporary American Cinema is the book on the subject that undergraduate classes have been waiting for ... Comprehensive, detailed, and intelligently organized [and] written in accessible and compelling prose ... Contemporary American Cinema will be embraced by instructors and students alike."
Charlie Keil, Director, Cinema Studies Program, University of Toronto, Canada.

"Contemporary American Cinema usefully gathers together a range of materials that provide a valuable resource for students and scholars. It is also a pleasure to read."
Hilary Radner, University of Otago, New Zealand.

"Contemporary American Cinema deepens our knowledge of American cinema since the 1960s. ... This is an important collection that will be widely used in university classrooms."
Lee Grieveson, University College London, UK.

"Contemporary American Cinema is a clear-sighted and tremendously readable anthology, mapping the terrain of post-sixties US cinema with breadth and critical verve."
Paul Grainge, University of Nottingham, UK.

"This collection of freshly written essays by leading specialists in the field will most likely be one of the most important works of reference for students and film scholars for years to come."
Liv Hausken, University of Oslo, Norway.

Contemporary American Cinema is the first comprehensive introduction to American cinema since 1960. The book is unique in its treatment of both Hollywood, alternative and non-mainstream cinema. Critical essays from leading film scholars are supplemented by boxed profiles of key directors, producers and actors; key films and key genres; and statistics from the cinema industry.

Illustrated in colour and black and white with film stills, posters and production images, the book has two tables of contents allowing students to use the book chronologically, decade-by-decade, or thematically by subject. Designed especially for courses in cinema studies and film studies, cultural studies and American studies, Contemporary American Cinema features a glossary of key terms, fully referenced resources and suggestions for further reading, questions for class discussion, and a comprehensive filmography.

Linda Ruth Williams and Michael Hammond are senior lecturers in film at the University of Southampton, United Kingdom.

Introduction - the whats, hows and whys of this book

The 1980s
1: Introduction
2: Film in the age of Reagan: action cinema and reactionary politics
3: Independent Cinema since the 1980s
4: Disney and the Family Adventure movie since the 1970s
5: The Vietnam War in American Cinema
6: U.S. Documentary in the 1980s Suggested Further ReadingEssay Questions

GOR003643257
Contemporary American Cinema by Linda Ruth Williams
Linda Ruth Williams
Used - Very Good
Paperback
Open University Press
2006-05-01
584
0335218318
9780335218318
N/A
Book picture is for illustrative purposes only, actual binding, cover or edition may vary.
This is a used book - there is no escaping the fact it has been read by someone else and it will show signs of wear and previous use. Overall we expect it to be in very good condition, but if you are not entirely satisfied please get in touch with us.