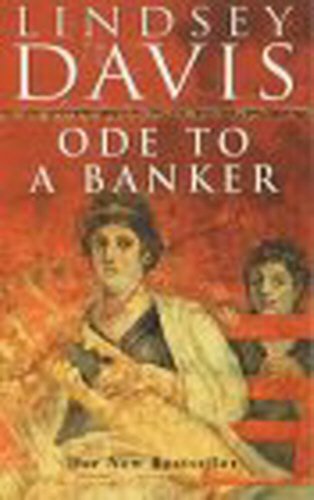 Ode To A Banker
by Lindsey Davis

In Stock
£4.99
Aurelius Chrysippus, rich Greek banker and patron of aspiring writers, offers to publish the work of Marcus Didius Falco, private informer and spare-time poet. This golden opportunity rapidly palls for Falco when a visit to the Chrysippus "scriptorium" implicates him in a gruesome literary murder.
Very Good
Only 2 left

Ode To A Banker Summary

Ode To A Banker by Lindsey Davis

In the long, hot Roman Summer of AD74, Marcus Didius Falco, private informer and spare-time poet, gives a reading for his family and friends. Things get out of hand as usual. The event is taken over by Aurelius Chrysippus, a wealthy Greek banker and patron to a group of struggling writers, who offers to publish Falco's work - a golden opportunity that rapidly palls. A visit to the Chrysippusscriptorium implicates him in a gruesome literary murder so when Petronius Longus, the over-worked vigiles enquiry chief, commissions him to investigate, Falco is forced to accept. Lindsey Davis' twelfth novel wittily explores Roman publishing and banking, taking us from the jealousies of authorship and the mire of patronage, to the darker financial world, where default can have fatal consequences...

Ode To A Banker Reviews

"Her witty and literate Falco novels are models of the genre." - "Times"

"One can only hope that Falco will be around for as long as Flashman." - "Time Out"

"A rollicking narrative... its award-winning author [is] in excellent form. - Frances Fyfield

Lindsey Davis has written over twenty historical novels, beginning with The Course of Honour. Her bestselling mystery series features laid-back First Century detective Marcus Didius Falco and his partner Helena Justina, plus friends, relations, pets and bitter enemy the Chief Spy. After an English degree at Oxford University, Lindsey joined the Civil Service but became a professional author in 1989. Her books are translated into many languages and have been dramatized on BBC Radio 4. Her many prizes include the Premio Colosseo, awarded by the Mayor of Rome 'for enhancing the image of Rome', the Sherlock award for Falco as Best Comic Detective and the Crimewriters' Association Cartier Diamond Dagger for lifetime achievement. She was born in Birmingham but now lives in Greenwich, London. Her most recent books are Master and God followed by The Ides of April.

GOR001194167
Ode To A Banker by Lindsey Davis
Lindsey Davis
Used - Very Good
Paperback
Cornerstone
2001-06-01
368
0099298201
9780099298205
N/A
Book picture is for illustrative purposes only, actual binding, cover or edition may vary.
This is a used book - there is no escaping the fact it has been read by someone else and it will show signs of wear and previous use. Overall we expect it to be in very good condition, but if you are not entirely satisfied please get in touch with us.