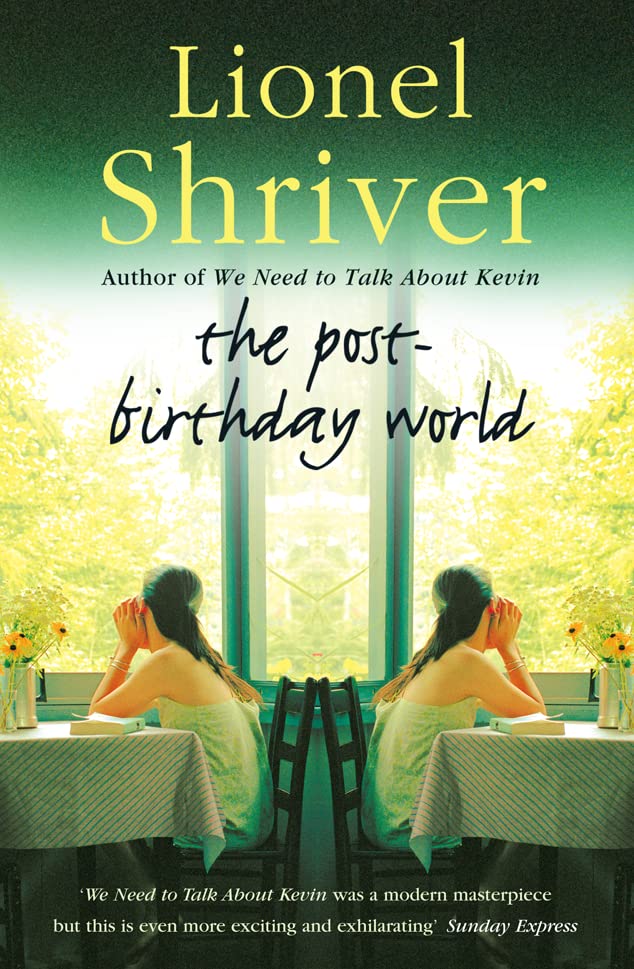 The Post-Birthday World
by Lionel Shriver

The Post-Birthday World by Lionel Shriver

It all hinges on one kiss. Whether Irina McGovern does or does not lean in to a specific pair of lips in London will determine whether she stays with her disciplined, intellectual partner Lawrence or runs off with Ramsey, a hard-living snooker player. Using a parallel universe structure, we follow Irina's life as it unfolds under the influence of two drastically different men. Lawrence is Irina's partner of nearly ten years. Ramsey is the ex-husband of a sometime friend, a once-a-year acquaintance to whom Irina has never paid a great deal of attention. Where Lawrence is supportive and devoted; Ramsey is flighty and spontaneous. Lawrence is emotionally withdrawn to the point of repression; Ramsey is fiery and passionate, but volatile. The contrasts between the two men have ramifications for Irina's relationships with friends and family, for her career as an illustrator, and more importantly, for the texture of her daily life.

This love is about trade-offs. Both men in Irina's dual future are worthy of her affection but deeply flawed. The answer is that there is no perfect answer: one of the things that draws us to our mates is what is wrong with them. The Post-Birthday World is written with all the subtlety, perceptiveness and drama that made We Need to Talk About Kevin an international bestseller.

Praise for The Post-Birthday World:

'Those of us who rave about the dash and dare of Lionel Shriver's fiction can rejoice that The Post-Birthday World, a 'Sliding Doors'-style joint tale of alternative loves and lives, will garner the attention she always deserves'
Independent

''a compelling survey of the competing merits of security vs.desire.'
Saturday Guardian

'Shriver gives us another passionate novel...Like Sliding Doors, the tale splits into two, following the dramatic turns of each choice. Brilliant'
Cosmopolitan

'It's another domestic drama with a compelling twist...the power struggle between the sexes is spot-on. Shriver chalks her narrative cue with relish and, once the story gets underway, it's hard to take your eyes off the green baize'
Tatler

Lionel Shriver's novels include the New York Times bestseller The Post-Birthday World and the international bestseller We Need to Talk About Kevin, which won the 2005 Orange Prize and has now sold over a million copies worldwide. Earlier books include Double Fault, A Perfectly Good Family, and Checker and the Derailleurs. Her novels have been translated into twenty-five different languages. Her journalism has appeared in The Guardian, The New York Times, The Wall Street Journal, and many other publications. She lives in London.

GOR010564686
The Post-Birthday World by Lionel Shriver
Lionel Shriver
Used - Like New
Paperback
HarperCollins Publishers
2008-04-01
608
0007245149
9780007245147
N/A
Book picture is for illustrative purposes only, actual binding, cover or edition may vary.
This is a used book - there is no escaping the fact it has been read by someone else and it will show signs of wear and previous use. Overall we expect it to be in very good condition, but if you are not entirely satisfied please get in touch with us.