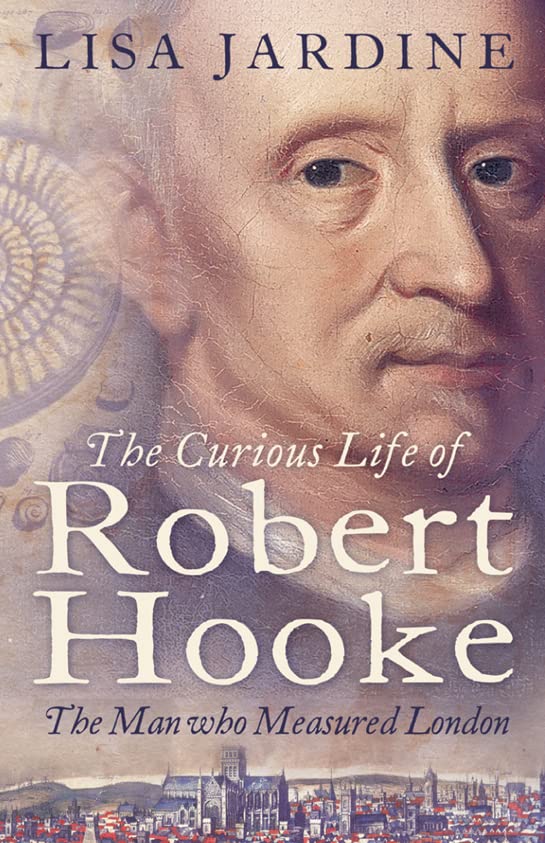 The Curious Life of Robert Hooke
by Lisa Jardine

A biography of a brilliant, largely forgotten maverick - a major figure in the 17th-century cultural and scientific revolutions.

The Curious Life of Robert Hooke: The Man who Measured London by Lisa Jardine

A biography of a brilliant, largely forgotten maverick - a major figure in the 17th-century cultural and scientific revolutions.

The brilliant, largely forgotten maverick Robert Hooke was an engineer, surveyor, architect and inventor who was appointed London's Chief Surveyor after the Great Fire of 1666. Throughout the 1670s he worked tirelessly with his intimate friend Christopher Wren to rebuild London, personally designing many notable public and private buildings, including the monument to the fire. He was the first Curator of Experiments at the Royal Society, and author and illustrator of `Micrographia', a lavishly illustrated volume of fascinating engravings of natural phenomena as seen under the new microscope. He designed an early balance-spring watch, was a virtuoso performer of public anatomical dissections of animals, and kept himself going with liberal doses of cannabis and poppy water (laudanum).

Hooke's personal diaries - as cryptically confessional as anything Pepys wrote - record a life rich with melodrama. He came to London as a fatherless boy of thirteen to seek his fortune as a painter, rising by his wits to become an intellectual celebrity. He never married, but formed a long-running illicit liaison with his niece. A dandy, boaster, workaholic, insomniac and inveterate socialiser in London's most fashionable circles, Hooke's irascible temper and passionate idealism proved fatal for his relationships with men of influence, most notably with Sir Isaac Newton, who, after one violent row, wiped Hooke's name from the Royal Society records and destroyed his portrait.

In this lively and absorbing biography, Lisa Jardine at last does Hooke and his achievements justice. Illuminating London's critical role in the emergence of modern science, she rediscovers and decodes a great original thinker of indefatigable curiosity and imagination, a major figure in the 17th-century intellectual and scientific revolution.

`Nobody can explain factual history more clearly than Jardine.' The Times

`Jardine sets out to penetrate the obscurity and show us the man...a fascinating, impeccably researched account.' Jenny Uglow, Guardian

`Lisa Jardine is a new star on England's literary and historical scene. She has a gift, which so few historians possess, of making the past seem relevant to our own times.' Paul Johnson

`Not nearly as well known today as his close friend Wren of his bitter enemy Newton, Hooke did as much as either of them to define the intellectual character of his age.' Sunday Times

Lisa Jardine CBE is Director of the Centre for Editing Lives and Letters, and Centenary Professor of Renaissance Studies at Queen Mary, University of London. She is a Fellow of the Royal Historical Society and an Honorary Fellow of King's College, Cambridge and Jesus College, Cambridge. She writes and reviews for all the major UK national newspapers and magazines and for the 'Washington Post', and has presented and appears regularly on arts, history and current affairs programmes for TV and radio. She is a regular writer and presenter of 'A Point of View', on BBC Radio 4. She judged many important literary prizes including the 2000 Orwell Prize and the 2002 Man Booker Prize. She is the author of a number of best-selling general books, including 'Worldly Goods: A New History of the Renaissance', 'Ingenious Pursuits: Building the Scientific Revolution', and biographies of Sir Christopher Wren and Robert Hooke. Lisa Jardine is married to the architect John Hare and has three children.

GOR001180546
The Curious Life of Robert Hooke: The Man who Measured London by Lisa Jardine
Lisa Jardine
Used - Very Good
Paperback
HarperCollins Publishers
2004-09-06
448
0007151756
9780007151752
N/A
Book picture is for illustrative purposes only, actual binding, cover or edition may vary.
This is a used book - there is no escaping the fact it has been read by someone else and it will show signs of wear and previous use. Overall we expect it to be in very good condition, but if you are not entirely satisfied please get in touch with us.