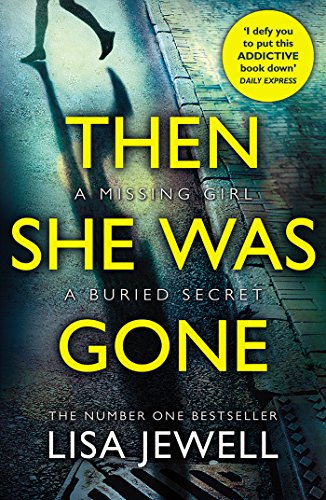 Then She Was Gone
by Lisa Jewell

Then She Was Gone Summary

Then She Was Gone: From the number one bestselling author of The Family Upstairs by Lisa Jewell

'Grips to the point of OBSESSION'

'My life STOPPED while I read this book'

'My heart was THUMPING in my chest'

'This is EDGE OF YOUR SEAT reading'

'This book left me BREATHLESS'

'Cancel all plans and BUY THIS BOOK'

She was fifteen, her mother's golden girl.
She had her whole life ahead of her.
And then, in the blink of an eye, Ellie was gone.

Ten years on, Laurel has never given up hope of finding Ellie. And then she meets a charming and charismatic stranger who sweeps her off her feet.

But what really takes her breath away is when she meets his nine-year-old daughter.

Because his daughter is the image of Ellie.

Now all those unanswered questions that have haunted Laurel come flooding back.

What really happened to Ellie? And who still has secrets to hide?

Then She Was Gone Reviews

A MISSING GIRL. A BURIED SECRET.

From the acclaimed author of I Found You and the Richard & Judy bestseller, The Girls, comes a compulsively twisty psychological thriller that will keep you gripped to the very last page.

* from the publisher's description *
Both utterly gripping and startlingly original. Prepare to be hooked. * Sun *
I defy you to put this addictive book down until you reach the final heart-breaking page * Daily Express *
What begins as a story about the mother of a missing girl starting a new relationship as she comes terms with her grief morphs into a gripping, disturbing and utterly fascinating tale about what really happened to young Ellie Mack. I've been a Lisa Jewell fan for a long time and in this book, as in all her others, she deftly weaves a compelling plot with an emotional depth that leaves you gasping. In Then She Was Gone she has created a book that is dark and claustrophobic but also heartfelt and moving. Then She Was Gone packs a huge emotional punch that will leave you winded. I loved it. -- CL Taylor, author of The Escape, The Lie and The Missing
A dark, compulsive psychological thriller, yet one which is also uplifting and tender. I absolutely loved Then She Was Gone. -- Rachel Rhys, author of Dangerous Crossing 9733
A tense clever page-tuner that everyone will be talking about. -- Adele Parks
She has departed from her usual chick lit and gone full tilt into a psycho thriller, but she's lost none of her brilliance. Indeed, I think this is my favourite of hers so far... Deeply emotional and incredibly clever. Bravo * Mail Online *
Unnerving, and with a juicy reveal, this is rightly a modern classic * Grazia *
Jewell builds a gripping novel around a maze of dark secrets, a tautly wound psychological thriller in which the suspense builds slowly. Her storytelling is immaculate, hopping between past and present, and in and out of characters. It's a tough read at times, but Jewell always keeps everything moving. The intrigue never flags as she pushed towards a redemptive resolution. As astute and emotionally charged read, riddled with creepiness. Fully recommended * Irish News *
Smart and engrossing * Sunday Mirror *
After last year's fantastic I Found You, Lisa Jewell is on a roll with another fast paced and cleverly plotted psychological thriller ... If this sounds quite run of the mill, it's not. Lisa Jewell writes with such a keen eye for detail, so much heart and yet deviousness that I can't wait to read what she comes up with next * Red *
If you're looking for something darker and twistier Girl On The Train style, Lisa Jewell's new thriller, Then She Was Gone ... is one to buy * Voucher Codes *
Smart and engrossing, this deftly plotted thriller will tug at your heartstrings * The People *
This compulsive psychological read from one of our favourite authors will leave you breathless * Fabulous Magazine *
pleasingly twisted... I gulped this in one long, thirsty session, sitting by the pool on holiday. * The Pool *
This book was simply perfect - easy to fall into, hard to escape, and with so much to figure out you barely wanted to leave anyway. * Bookbag *
Chilling and heartbreaking * Good Housekeeping *
Jewell builds a gripping novel around a maze of dark secrets, a tautly wound psychological thriller in which the suspense builds slowly. Fully recommended * Dorset Echo *
Jewell has always been a favourite writer. Seeing her fully embrace her dark side is a massive treat. A dark, sad and deeply disturbing exploration of the aftermath of the loss of a beloved child, Then She Was Gone deserves to be a huge hit.
an engrossing read * Mature Times *
beautifully told... the reader is taken from heartbreak to hope via a series of twists and turns worthy of the best thrillers * LivingEDGE *
highly entertaining * In Style *
'In this dark and captivating novel, the different strands slowly but surely come together, and the result is that rare thing - a thriller that will break your heart' * Metro *

Lisa Jewell was born in London. Her first novel, Ralph's Party, was the bestselling debut novel of 1999. Since then she has published another sixteen novels, most recently a number of dark psychological thrillers, including The Girls and Then She Was Gone (both of which were Richard & Judy Book Club picks) as well as I Found You and Watching You. Lisa is a top ten New York Times and number one Sunday Times bestselling author who has been published worldwide in over twenty-five languages. She lives in north London with her husband, two daughters, two cats, two guinea pigs and the best dog in the world.

GOR008814234
Then She Was Gone: From the number one bestselling author of The Family Upstairs by Lisa Jewell
Lisa Jewell
Used - Very Good
Paperback
Cornerstone
2017-12-14
448
1784756253
9781784756253
N/A
Book picture is for illustrative purposes only, actual binding, cover or edition may vary.
The book has been read but remains in clean condition. All pages are intact and the cover is intact. Some minor wear to the spine.