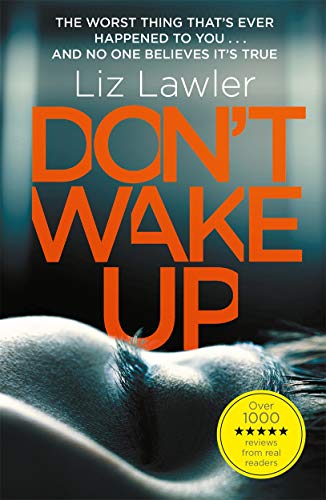 Don't Wake Up
by Liz Lawler

Used Price
£2.69
New RRP £8.99
Free Shipping in the UK
A pitch-black psychological thriller for fans of Before I Let You In by Jenny Blackhurst and The Lie by C.L.So compulsive you can't stop reading.So chilling you won't stop talking about it.Don't Wake Up is a dark, gripping psychological thriller with a horrifying premise and a stinging twist .
Very Good Good Well Read

Don't Wake Up: The most gripping first chapter you will ever read! by Liz Lawler

The pitch-black bestselling psychological thriller for fans of Friend Request by Laura Marshall and I Am Watching You by Teresa Driscoll. Alex Taylor wakes up tied to an operating table. The man who stands over her isn't a doctor. The choice he forces her to make is utterly unspeakable. But when Alex re-awakens, she's unharmed - and no one believes her horrifying story. Ostracised by her colleagues, her family and her partner, she begins to wonder if she really is losing her mind. And then she meets the next victim. So compulsive you can't stop reading. So chilling you won't stop talking about it. Don't Wake Up is a dark, gripping psychological thriller with a horrifying premise and a stinging twist . . . 'Outstanding . . . a rollercoaster of a read' Angela Marsons Read what real readers have to say about DON'T WAKE UP: 'A gripping read right up to the end . . . fast-paced, well written and exciting' 'Full of twists . . . one of the best books I've read in a while' 'Mind-blowing. It kept me guessing from the beginning to the end' 'A perfect balance of suspense, drama, crime and mystery. A superbly executed book I could not stop reading!'

Makes the heart beat faster * Mojo Mums *
Just reading the back of this book sent shivers down my back. So much is packed into this incredible story, I wanted to find out who the doctor was but wasn't sure if I did as it would mean the end of the story. A story that will really pull you in * Echoes in an Empty Room *
This is compelling, compulsive reading with a truly twisted heart and mind at its centre. A must for those who love psychological thrillers. * Buried Under Books *
Don't Wake Up is an engrossing read that successfully challenges perceptions and prejudices and does a good job of concealing its secrets * Crime Review *
Lawler creates a diverse cast of characters and toggles between them seamlessly to create an exciting narrative... Readers will look forward to her next psychological thriller * Publishers Weekly *

Born in Chatham and partly raised in Dublin, Liz Lawler is one of fourteen children and grew up sharing socks, pants, stuffed bras and a table space to eat at. Liz spent over twenty years working as a nurse, and has since worked as a flight attendant and as the general manager of a five-star hotel. She now lives in Bath with her husband. Don't Wake Up is her first novel.

GOR008653017
Don't Wake Up: The most gripping first chapter you will ever read! by Liz Lawler
Liz Lawler
Used - Very Good
Paperback
twenty7
2017-10-05
368
1785770578
9781785770579
N/A
Book picture is for illustrative purposes only, actual binding, cover or edition may vary.
The book has been read, but looks new. The book cover has no visible wear, and the dust jacket is included if applicable. No missing or damaged pages, no tears, possible very minimal creasing, no underlining or highlighting of text, and no writing in the margins.