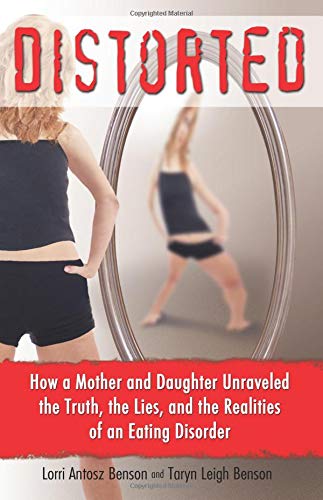 In Stock
£3.99
In an epidemic culture of disordered eating, this is the first book to provide both sides of the story: alternating mother-daughter perspectives on one teens battle with anorexia and bulimia, examining the nitty-gritty relationship dynamics and the many manipulative nuances that personify this misunderstood disease.
Very Good
Only 2 left

Distorted: How a Mother and Daughter Unravelled the Truth, the Lies, and the Realities of an Eating Disorder by Lorri Antosz Benson

Mom saw a popular, happy teen, poised to revel in her high school years; her daughter saw a fat, ugly loser, and vowed to take action. One saw glimmers of hope and researched to find the best care; the other had no intentions of getting better and researched new and clever ways to hide her compulsion. Such is the distorted reality in this riveting true account of a teen caught in the grips of an eating disorder and the mother who struggled to help her break free.

Through their gripping dual narrative, Lorri and Taryn Benson take turns chronicling their unique perceptions of events once Taryn was caught in the act of her first purge. With unflinching frankness, they reveal the deceit, the guilt, the shame, and the manipulations that are inherent in this enigmatic disease, unveiling the true picture of what happens to the family dynamic once an eating disorder takes hold. Much more than a cautionary tale, Distorted illustrates the psychological factors that underline the beginning and spread of the disease, the successful and unsuccessful therapies, and the consequences the disease had on themselves and their family.

Triumphantly, the two women share what was ultimately needed to bring the truth to light, providing guidance for anyone struggling with or affected by an eating disorder. Their two stories--woven together as one powerful beacon of hope--will offer insight and comfort to families, spouses, and loved ones who feel helpless and alone.

"Distorted is a powerful, penetrating look inside the world of disturbed eating and its far-reaching effects on the family. This jointly crafted account provides multiple windows into the experience of disordered eating, highlighting both the tragic and triumphant dimensions of attempted recovery.'
Greg J. Neimeyer, Ph.D.
Department of Psychology
University of Florida

Lorri Antosz Benson is a two-time Emmy-award winning talk show producer and nationally-syndicated columnist who wrote about talk shows for Tribune Media Services for eleven years. While the senior producer for 'DONAHUE, ' she appeared on such shows as Boston's Morning Show and CBS This Morning. Taryn Leigh Benson is a college student working toward her nursing degree, and is in active recovery from an eating disorder. She was profiled in a documentary, which was used as part of the psychology curriculum at the University of Florida.

GOR008253249
Distorted: How a Mother and Daughter Unravelled the Truth, the Lies, and the Realities of an Eating Disorder by Lorri Antosz Benson
Lorri Antosz Benson
Used - Very Good
Paperback
Health Communications
2008-02-08
256
0757305946
9780757305948
N/A
Book picture is for illustrative purposes only, actual binding, cover or edition may vary.
This is a used book - there is no escaping the fact it has been read by someone else and it will show signs of wear and previous use. Overall we expect it to be in very good condition, but if you are not entirely satisfied please get in touch with us.