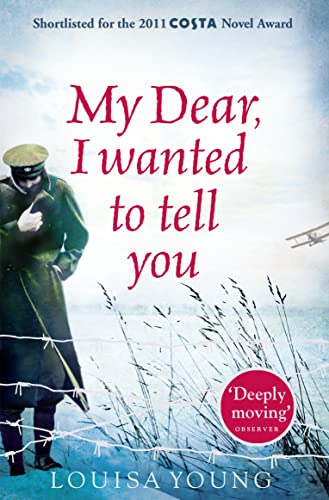 My Dear I Wanted to Tell You
by Louisa Young

A letter, two lovers, a terrible lie. In war, truth is only the first casualty. `Inspires the kind of devotion among its readers not seen since David Nicholls' One Day' The Times

My Dear I Wanted to Tell You Summary

My Dear I Wanted to Tell You by Louisa Young

A letter, two lovers, a terrible lie. In war, truth is only the first casualty. `Inspires the kind of devotion among its readers not seen since David Nicholls' One Day' The Times

While Riley Purefoy and Peter Locke fight for their country, their survival and their sanity in the trenches of Flanders, Nadine Waveney, Julia Locke and Rose Locke do what they can at home. Beautiful, obsessive Julia and gentle, eccentric Peter are married: each day Julia goes through rituals to prepare for her beloved husband's return. Nadine and Riley, only eighteen when the war starts, and with problems of their own already, want above all to make promises - but how can they when the future is not in their hands? And Rose? Well, what did happen to the traditionally brought-up women who lost all hope of marriage, because all the young men were dead?

Moving between Ypres, London and Paris, My Dear I Wanted to Tell You is a deeply affecting, moving and brilliant novel of love and war, and how they affect those left behind as well as those who fight.

My Dear I Wanted to Tell You Reviews

`Every once in a while comes a novel that generates its own success, simply by being loved.'
The Times

`Birdsong for the new millennium'
Tatler

`Powerful, sometimes shocking, boldly conceived, it fixes on war's lingering trauma to show how people adapt - or not - and is irradiated by anger and pity'
The Sunday Times

`[A] tender, elegiac novel. Others have been here before, of course, from Sebastian Faulks to Pat Barker, but Young belongs in their company'
Mail on Sunday

`Weaving heartbreakingly painful irony, heroic sacrifice, human weakness, vanity, tragedy and the purest of loves, you'll be left sobbing and grasping onto any hope that all is not lost amid the poppies, the guns and the hospital beds'
Easy Living

`This novel is a triumph'
Elizabeth Jane Howard

`Young has a historian's eye for the private details of war, and a warmth to her prose that makes her small cast emotionally engaging ... Through Riley, however, the novel achieves an appeal to compassion and courage that deserves to reach a wide audience ... Hindsight tells us peace will not be final, but Young conveys, beautifully, the universal wish that it might be'
Independent

`This is a moving and powerful novel, one you're not likely to forget'
Choice

`A book that should be read by everyone'
New Books

Louisa Young was born in London. She was for many years a freelance journalist, working mostly for the motorcycle press, for Marie Claire and for the Guardian. She has travelled widely and published ten books. She lives in London and Italy with her daughter. She is the adult half of Zizou Corder, authors of the best-selling Lionboy trilogy, which is published in 36 languages.

GOR003383695
My Dear I Wanted to Tell You by Louisa Young
Louisa Young
Used - Very Good
Paperback
HarperCollins Publishers
2012-01-05
416
0007361440
9780007361441
Winner of Galaxy National Book Awards: audible.co.uk Audiobook of the Year 2011 Short-listed for Costa Novel Award 2011
Book picture is for illustrative purposes only, actual binding, cover or edition may vary.
This is a used book - there is no escaping the fact it has been read by someone else and it will show signs of wear and previous use. Overall we expect it to be in very good condition, but if you are not entirely satisfied please get in touch with us.