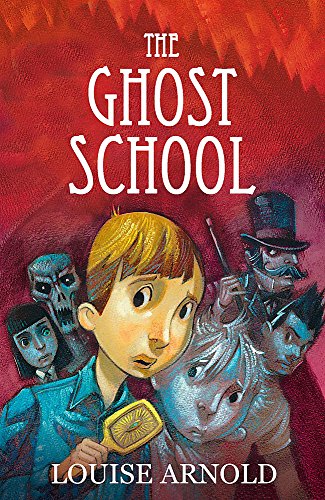 In many ways, the Ghost World is like the Real World and, in many ways, Ghosts are just like Humans, except they are never born and they never die.

One day they appear and then one day they're gone

But recently, more ghosts than usual have been disappearing.

Just vanishing into even thinner air. So many, so quickly, that it can only mean one thing...

Grey Arthur finally knows where he belongs - at the side of Tom Golden - as his invisible friend.

He's been thinking that maybe there are other ghosts like him, who aren't very good at haunting and would make perfect invisible friends. And so the School for Invisible Friends begins ...

But where have all the good ghosts gone? Something very strange is going on and even things in the Real World don't seem right!

Faced with the prospect of losing Arthur, Tom realises that he not only needs his invisible friend, but that Arthur needs him too, and now, more than ever ...

FOR INVISIBLE FRIEND:
"A delightful debut" The Sunday Times

"A joy to read aloud" The Sunday Times

"If you enjoyed the early Harry Potter books, it's right up your street." The Funday Times

Louise Arnold's distinctive voice comes shining through in this brilliantly funny novel, a treat for established fans of the series, as well as those discovering Tom and Grey ARthur for the first time. * us magazine *

Louise Arnold was born in Morden, Surrey. Her love of writing began at the age of four when she wrote her first poem. From the age of eight she lived in Bognor Regis until passing her A-Levels. Louise took a year out before university and back-packed, Amtrak'ed and GreyHound-ed across America. She graduated in 2003, from the University of Kent, with a 2.1 in drama (specialising in Stand-Up Comedy) and has now settled in Canterbury with her partner. Her spare time is taken up with a love of e-bay and carboot sales, changing the colour of her hair, and borrowing the neighbour's cat until she can buy her own Siamese. Grey Arthur: The Invisible Friend is her first novel.

GOR001068754
Ghost School by Louise Arnold
Louise Arnold
The Invisible Friend
Used - Very Good
Paperback
Hachette Children's Group
2006-06-01
336
0340892986
9780340892985
N/A
Book picture is for illustrative purposes only, actual binding, cover or edition may vary.
This is a used book - there is no escaping the fact it has been read by someone else and it will show signs of wear and previous use. Overall we expect it to be in very good condition, but if you are not entirely satisfied please get in touch with us.