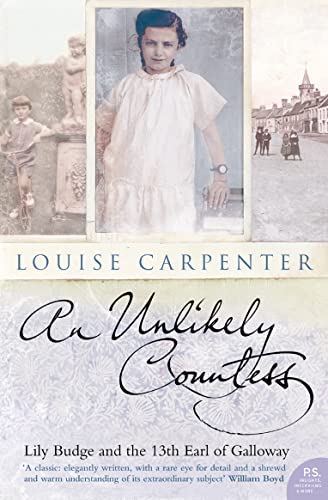 An Unlikely Countess
by Louise Carpenter

A vivid and moving portrait of the inimitable Lily Budge, who overcame poverty and class to become the 13th Countess of Galloway, and one of Scotland's most colourful eccentrics.

An Unlikely Countess: Lily Budge and the 13th Earl of Galloway by Louise Carpenter

A vivid and moving portrait of the inimitable Lily Budge, who overcame poverty and class to become the 13th Countess of Galloway, and one of Scotland's most colourful eccentrics.

Randolph Stewart was lobotomized as a teenager after a crude diagnosis of schizophrenia. When the operation went wrong, he was hidden away by his aristocratic parents in a mental institution and then taken in by a sect of monks. By the time Lily Budge met him in 1975, he appeared a shy and lonely tramp. In reality he was the future Earl of Galloway, heir to a fortune and a title considered to be linchpin of the Scottish establishment. Lily, an extroverted character from a working-class family, would join him in a powerful bond of love that challenged conventions, made national headlines, and led to enormous heartache.

A vibrant portrait of 20th-century Scotland, `An Unlikely Countess' is also a profile of two unforgettable characters, and the doomed love that they shared.

`A spirited and sensitive account of one of the strangest lives imaginable. Louise Carpenter's portrait of the life of Lily Budge is a classic of its kind: elegantly written, with a rare eye for detail and a shrewd and warm understanding of its extraordinary subject.' William Boyd

`Louise Carpenter tells this sensational story without ever exaggerating its more eye-catching excesses. She is sensitive to all sides...a serious and profoundly moving book.' Independent on Sunday

`Louise Carpenter is a biographer of real promise...Her account of this oddly matched couple struggling to get along in Britain's high society is often amusing, sometimes touching...Painstakingly researched and very readable.' Scottish Herald

Louise Carpenter was born in 1970 and grew up in Essex. She read English Literature at the University of London and worked as assistant editor of the Daily Telegraph Magazine, where she is now a writer and contributing editor. She lives in Bath with her family.

GOR000966053
An Unlikely Countess: Lily Budge and the 13th Earl of Galloway by Louise Carpenter
Louise Carpenter
Used - Very Good
Paperback
HarperCollins Publishers
2005-10-03
288
0007108818
9780007108817
N/A
Book picture is for illustrative purposes only, actual binding, cover or edition may vary.
This is a used book - there is no escaping the fact it has been read by someone else and it will show signs of wear and previous use. Overall we expect it to be in very good condition, but if you are not entirely satisfied please get in touch with us.