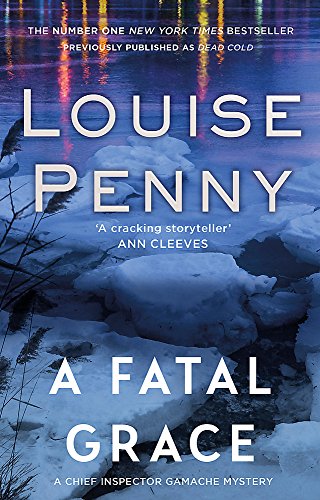 A Fatal Grace
by Louise Penny

A Fatal Grace by Louise Penny

Winter in Three Pines, and the sleepy village is carpeted in snow. It's a time of peace and goodwill - until a scream pierces the biting air. A spectator at the annual Boxing Day curling match has been fatally electrocuted. Despite the large crowd, there are no witnesses and - apparently - no clues.

Chief Inspector Armand Gamache discovers a history of secrets and enemies in the dead woman's past. But he has enemies of his own, and as he is frozen out of decision-making in the Surete du Quebec, he has to decide who he can trust...

Louise Penny's writing is intricate, beautiful and compelling. She is an original voice, a distillation of both PD James and Barbara Vine at their peaks and a worthy successor to both * Peter James *
Full of twists and turns . . . Wonderfully satisfying * Kate Mosse on How the Light Gets In *
Penny's elegant style is deeply satisfying, while Gamache is contemplative even when under pressure, and remains a man you want to spend time with * Metro *
Impossible to put down * Globe and Mail on A Rule Against Murder *

GOR009180597
A Fatal Grace by Louise Penny
Louise Penny
Chief Inspector Gamache
Used - Very Good
Paperback
Little, Brown Book Group
2018-05-03
432
0751573779
9780751573770
N/A
Book picture is for illustrative purposes only, actual binding, cover or edition may vary.
This is a used book - there is no escaping the fact it has been read by someone else and it will show signs of wear and previous use. Overall we expect it to be in very good condition, but if you are not entirely satisfied please get in touch with us.