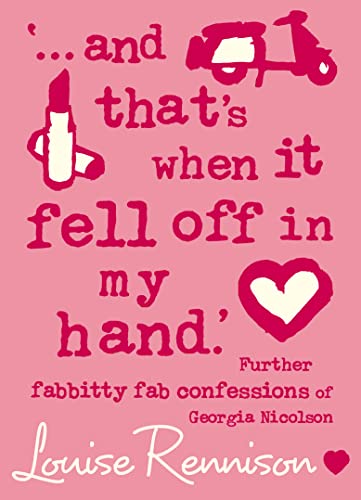 `... and that's when it fell off in my hand.'
by Louise Rennison

Brilliantly funny author Louise Rennison's fifth book of the confessions of crazy but lovable teenager, Georgia Nicolson. It'll have you laughing like a loon on loon tablets!

`... and that's when it fell off in my hand.' (Confessions of Georgia Nicolson, Book 5) by Louise Rennison

Brilliantly funny author Louise Rennison's fifth book of the confessions of crazy but lovable teenager, Georgia Nicolson. It'll have you laughing like a loon on loon tablets!

11.20 a.m.
This is my fabulous life: the Sex God left for Whakatane last month and he has taken my heart with him.
11.25 a.m.
Not literally of course otherwise there would be a big hole in my nunga-nungas.
11.28 a.m.
And also I would be dead. Which quite frankly would be a blessing in disguise.
12.00 p.m.
It is soooo boring being brokenhearted...

...but Georgia doesn't remain brokenhearted for long: frequent snogging extravaganzas with old flame, Dave the Laugh, and the arrival of jelloid-knee-inducing Italian Stallion, Masimo, mean Georgia has her work cut out to be the composed sex-kitten that she aspires to be.

Follow Georgia's hilarious antics as she desperately muddles her way through teenage life and all that it entails: make-up disasters, rapidly expanding nunga-nungas, school - urgh, unsympathetic friends, highly embarrassing family (and pets) and, of course, BOYS.

"Rennison at her best." Waterstone's Quarterly

Praise for other "Georgia titles:

"As fabbity-fab-fab as its predecessor" ALA Booklist (starred review)

"For those who already know and love Georgia, there's only one word necessary: more." Kirkus Reviews

GOR000574329
`... and that's when it fell off in my hand.' (Confessions of Georgia Nicolson, Book 5) by Louise Rennison
Louise Rennison
Confessions of Georgia Nicolson
Used - Very Good
Hardback
HarperCollins Publishers
2004-06-07
288
0007191472
9780007191475
Short-listed for British Book Awards: Children's Book of the Year 2006
Book picture is for illustrative purposes only, actual binding, cover or edition may vary.
This is a used book - there is no escaping the fact it has been read by someone else and it will show signs of wear and previous use. Overall we expect it to be in very good condition, but if you are not entirely satisfied please get in touch with us.