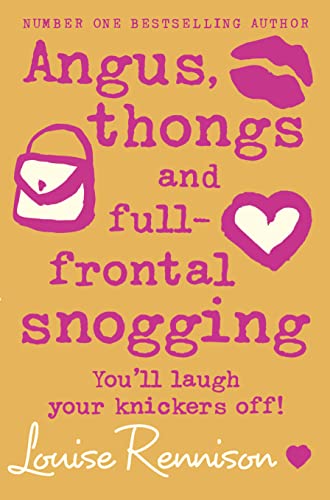 Brilliantly funny, teenage angst author Louise Rennison's first book about the confessions of crazy but lovable Georgia Nicolson. Now repackaged in a gorgeous new paperback and looking even fabber than ever. Louise is an international bestselling author and her books can't fail to make you laugh out loud.

Brilliantly funny, teenage angst author Louise Rennison's first book about the confessions of crazy but lovable Georgia Nicolson. Now repackaged in a gorgeous new paperback and looking even fabber than ever. Louise is an international bestselling author and her books can't fail to make you laugh out loud.

There are six things very wrong with my life:

1. I have one of those under-the-skin spots that will never come to a head but lurk in a red way for the next two years.
2. It is on my nose.
3. I have a three-year-old sister who may have peed somewhere in my room.
4. In fourteen days the summer hols will be over and then it will be back to Stalag 14 and Oberfuhrer Frau Simpson and her bunch of sadistic 'teachers'.
5. I am very ugly and need to go into an ugly home.
6. I went to a party dressed as a stuffed olive.

Follow Georgia's hilarious antics as she tries to overcome the dilemma's that are weighing up against her, and muddle her way through teenage life and all that it entails: how to replace accidentally shaved-off eyebrows; how to cope with Angus, her small labrador-sized Scottish wildcat; her first kiss with Peter - afterwards known as Whelk Boy; annoying teachers; unsympathetic friends and family, and how to entice Robbie the Sex God! Phew - she's really got her work cut out!

"This very funny book perfectly captures the agony of being a teenager." Book of the Week, Sunday Mirror

"This book could seriously damage your health... you could die laughing" Carousel magazine

GOR001092790
Angus, thongs and full-frontal snogging (Confessions of Georgia Nicolson, Book 1) by Louise Rennison
Louise Rennison
Confessions of Georgia Nicolson
Used - Very Good
Paperback
HarperCollins Publishers
2005-08-01
256
0007218672
9780007218677
N/A
Book picture is for illustrative purposes only, actual binding, cover or edition may vary.
This is a used book - there is no escaping the fact it has been read by someone else and it will show signs of wear and previous use. Overall we expect it to be in very good condition, but if you are not entirely satisfied please get in touch with us.