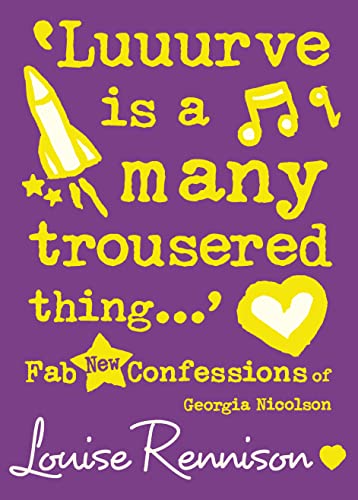 `Luuurve is a many trousered thing...'
by Louise Rennison

`Luuurve is a many trousered thing...' Summary

`Luuurve is a many trousered thing...' (Confessions of Georgia Nicolson, Book 8) by Louise Rennison

The original Sex God has re-landed, Masimo the Italian Stallion wants to be her boyfriend, and Dave the Laugh is still a regular snoggee. How will Georgia cope juggling all three boys? Have her days on the rack of love really gone for good? Surely not!

You'll laugh your knickers off at Georgia's hilarious confessions.

`Luuurve is a many trousered thing...' Reviews

GOR000937126
`Luuurve is a many trousered thing...' (Confessions of Georgia Nicolson, Book 8) by Louise Rennison
Louise Rennison
Confessions of Georgia Nicolson
Used - Very Good
Hardback
HarperCollins Publishers
2007-07-02
272
0007222106
9780007222100
N/A
Book picture is for illustrative purposes only, actual binding, cover or edition may vary.
This is a used book - there is no escaping the fact it has been read by someone else and it will show signs of wear and previous use. Overall we expect it to be in very good condition, but if you are not entirely satisfied please get in touch with us.