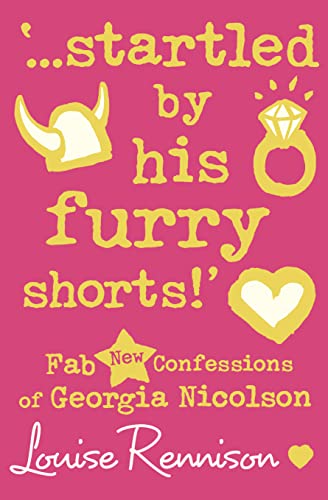 `...startled by his furry shorts!'
by Louise Rennison

Sound the Cosmic Horn! Bestselling author Louise Rennison's seventh book of the confessions of crazy but loveable teenager Georgia Nicolson is out in PB!

`...startled by his furry shorts!' Summary

`...startled by his furry shorts!' (Confessions of Georgia Nicolson, Book 7) by Louise Rennison

Sound the Cosmic Horn! Bestselling author Louise Rennison's seventh book of the confessions of crazy but loveable teenager Georgia Nicolson is out in PB!

Why did I admit I wanted Masimo to be my proper boyfriend? Why?

* One minute he was snogging me, and then the next he was snogging Wet Lindsay, stick insect and drip.
* Perhaps I should tell him he can go out with her as well as me...
* But then I might snog him after she has snogged him, which would mean I have practically snogged her!!! Erlack!
* I would rather snog my cat, Angus!
* He has certainly got nicer legs... Well, more of them anyway.

Georgia is on the `rack of luuurve' once more... Will Masimo the Italian Stallion agree to be her one and only boyfriend? How does she really feel about her old friend and lip-nibbling partner Dave the Laugh? And has Robbie the Sex God really gone for good?

You'll laugh with her and cry with her - follow Georgia's hilarious antics as she desperately tries to muddle her way through teenage life.

`...startled by his furry shorts!' Reviews

GOR001165944
`...startled by his furry shorts!' (Confessions of Georgia Nicolson, Book 7) by Louise Rennison
Louise Rennison
Confessions of Georgia Nicolson
Used - Very Good
Paperback
HarperCollins Publishers
2007-02-05
288
0007222092
9780007222094
N/A
Book picture is for illustrative purposes only, actual binding, cover or edition may vary.
This is a used book - there is no escaping the fact it has been read by someone else and it will show signs of wear and previous use. Overall we expect it to be in very good condition, but if you are not entirely satisfied please get in touch with us.