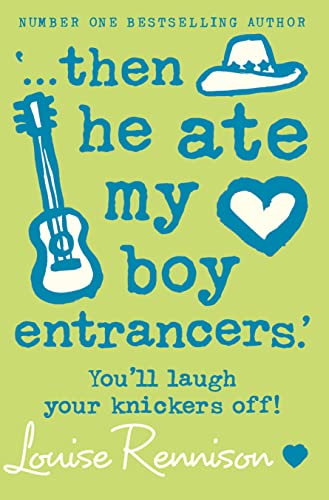 `... then he ate my boy entrancers.'
by Louise Rennison

Hilariously funny Louise Rennison's fabby sixth book of the confessions of crazy but lovable teenager Georgia Nicolson. Guaranteed to have the nation laughing their knickers off!

`... then he ate my boy entrancers.' Summary

`... then he ate my boy entrancers.' (Confessions of Georgia Nicolson, Book 6) by Louise Rennison

Hilariously funny Louise Rennison's fabby sixth book of the confessions of crazy but lovable teenager Georgia Nicolson. Guaranteed to have the nation laughing their knickers off!

"Come on, Jas, you do really want to know my plan, especially as it concerns you, my little hairy pally."
"I'm not hairy."
"Have it your own way, just don't go near any circuses."
"Shut up. Go on then, tell me your plan."
"OK, this is it: when I go to Hamburger-a-gogo land... you come with me! Do you see? We will be like Thelma and Louise!"
"We're not called Thelma and Louise."
"I know that, I'm just saying we will be LIKE THEM!"
"And we're not American. And neither of us can drive."
"Oh dear God. Jas, your spaceship has arrived. Please get in."

Laugh your knickers off at Georgia's tales from her trip to Hamburger-a-gogo land (the US) and her attempts to entice Masimo, the Italian stallion. Can Georgia become the composed sex-kitten she aspires to be...?

`... then he ate my boy entrancers.' Reviews

'...top teen saga... You'll be falling about laughing at this.' Mizz

`Fans will be thrilled with this latest instalment of the mad marvy confessions'. TES

`Rennison at her best.' Waterstone's Quarterly

Praise for other Georgia titles:

`As fabbity-fab-fab as its predecessor' ALA Booklist (starred review)

`For those who already know and love Georgia, there's only one word necessary: more.' Kirkus Reviews

GOR001136894
`... then he ate my boy entrancers.' (Confessions of Georgia Nicolson, Book 6) by Louise Rennison
Louise Rennison
Confessions of Georgia Nicolson
Used - Very Good
Paperback
HarperCollins Publishers
2006-01-28
336
0007183216
9780007183210
N/A
Book picture is for illustrative purposes only, actual binding, cover or edition may vary.
This is a used book - there is no escaping the fact it has been read by someone else and it will show signs of wear and previous use. Overall we expect it to be in very good condition, but if you are not entirely satisfied please get in touch with us.