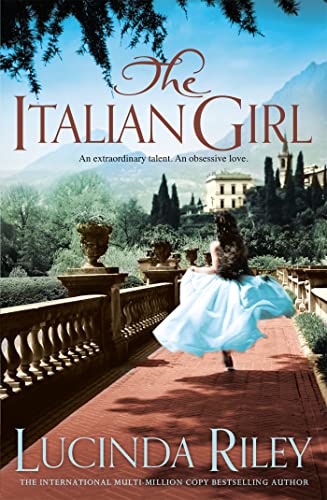 The Italian Girl
by Lucinda Riley

In Stock
£4,49
A tale of passion and betrayal from bestselling author Lucinda Riley.
Very Good Good Well Read
41 in stock

The Italian Girl by Lucinda Riley

Set against a memorable backdrop of Lucinda Riley's trademark evocative locations, The Italian Girl unfolds into a poignant and unforgettable tale of love, betrayal and self-discovery.

Nothing sings as sweetly as love, or burns quite like betrayal.

Rosanna Menici is just a girl when she meets Roberto Rossini, the man who will change her life. In the years to come, their destinies are bound together by their extraordinary talents as opera singers and by their enduring but obsessive love for each other - a love that will ultimately affect the lives of all those closest to them. For, as Rosanna slowly discovers, their union is haunted by irreversible events from the past . . .

Rosanna's journey takes her from humble beginnings in the back streets of Naples to the glittering stages of the world's most prestigious opera houses.

Lucinda is the author of The Seven Sisters series, which tells the story of adopted sisters and is based allegorically on the mythology of the famous star constellation. It has become a global phenomenon, with each book in the series being a No.1 bestseller across the world. The series is in development with a major Hollywood production company.

GOR005874674
The Italian Girl by Lucinda Riley
Lucinda Riley
Used - Very Good
Paperback
Pan Macmillan
2014-07-03
608
1447257073
9781447257073
N/A
Book picture is for illustrative purposes only, actual binding, cover or edition may vary.
This is a used book - there is no escaping the fact it has been read by someone else and it will show signs of wear and previous use. Overall we expect it to be in very good condition, but if you are not entirely satisfied please get in touch with us.