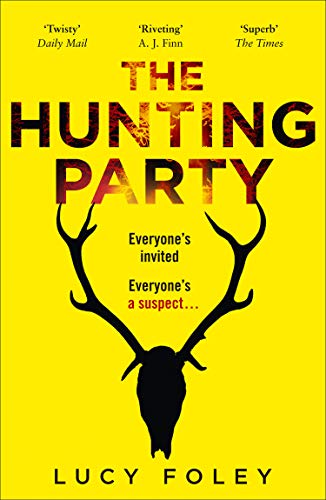 The Hunting Party
by Lucy Foley

The Hunting Party by Lucy Foley

*The Sunday Times No.1 bestseller*

EVERYONE'S INVITED.
EVERYONE'S A SUSPECT.
AND EVERYONE'S TALKING ABOUT IT.

In a remote hunting lodge, deep in the Scottish wilderness, old friends gather for New Year.

Not an accident - a murder among friends.

'Proves that the traditional country-house murder formula... can still work brilliantly... Foley is superb' - The Times

'A compelling locked room mystery . . . clever, twisty and sleek, it has "hit" written all over it' - Daily Mail

Lucy Foley studied English Literature at Durham and UCL universities and worked for several years as a fiction editor in the publishing industry, before leaving to write full-time. The Hunting Party is her debut crime novel, inspired by a particularly remote spot in Scotland that fired her imagination.

Lucy is also the author of three historical novels, which have been translated into sixteen languages. Her journalism has appeared in ES Magazine, Sunday Times Style, Grazia and more.

GOR010192176
The Hunting Party by Lucy Foley
Lucy Foley
Used - Like New
Paperback
HarperCollins Publishers
2019-10-21
416
0008297150
9780008297152
N/A
Book picture is for illustrative purposes only, actual binding, cover or edition may vary.
The book has been read, but looks new. The book cover has no visible wear, and the dust jacket is included if applicable. No missing or damaged pages, no tears, possible very minimal creasing, no underlining or highlighting of text, and no writing in the margins.