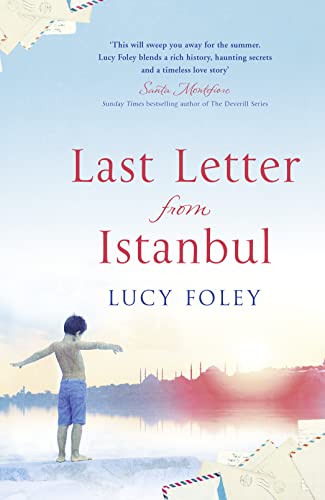 `This will sweep you away for the summer. Lucy Foley blends a rich history, haunting secrets and a timeless love story' Santa Montefiore, Sunday Times bestselling author of The Deverill series

`This will sweep you away for the summer. Lucy Foley blends a rich history, haunting secrets and a timeless love story' Santa Montefiore, Sunday Times bestselling author of The Deverill series

Each day Nur gazes across the waters of the Bosphorus to her childhood home, a grand white house, nestled on the opposite bank. Memories float on the breeze - the fragrance of the fig trees, the saffron sunsets of languid summer evenings. But now those days are dead.

The house has been transformed into an army hospital, it is a prize of war in the hands of the British. And as Nur weaves through the streets carrying the embroideries that have become her livelihood, Constantinople swarms with Allied soldiers - a reminder of how far she and her city have fallen.

The most precious thing in Nur's new life is the orphan in her care - a boy with a terrible secret. When he falls dangerously ill Nur's world becomes entwined with the enemy's. She must return to where she grew up, and plead for help from Medical Officer George Monroe.

As the lines between enemy and friend become fainter, a new danger emerges - something even more threatening than the lingering shadow of war.

`An evocative and sensitively written novel about ill-fated love, sacrifice and the violent effects of war' S Magazine

Lucy Foley studied English Literature at Durham and UCL universities. She then worked for several years as a fiction editor in the publishing industry - during which time she wrote her debut novel, The Book of Lost and Found. Lucy now writes full-time. During the year she divides her time between the UK and the Middle East - much of this novel was written in a garden in Tehran! - as well as travelling around the world for research and inspiration . She is currently working on her next book.

GOR009034456
Last Letter from Istanbul by Lucy Foley
Lucy Foley
Used - Very Good
Hardback
HarperCollins Publishers
2018-03-19
432
0008169071
9780008169077
N/A
Book picture is for illustrative purposes only, actual binding, cover or edition may vary.
This is a used book - there is no escaping the fact it has been read by someone else and it will show signs of wear and previous use. Overall we expect it to be in very good condition, but if you are not entirely satisfied please get in touch with us
Trustpilot