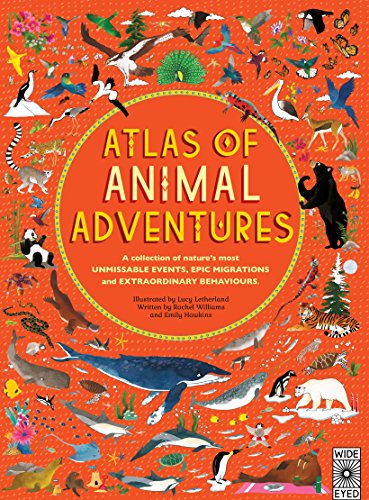 Atlas of Animal Adventures brings together the most unmissable events, epic migrations and extraordinary behaviours of the animal kingdom, from around the world.

From the team behind the bestselling Atlas of Adventures, this journey of discovery takes you in large format through 31 of nature's most unmissable animal events from between the two poles, including epic migrations, extraordinary behaviours and Herculean habits. There are hundreds of things to spot and facts to learn.

Celebrate the incredible ways in which animals survive in the wild: with every turn of the page, you'll meet another of nature's most adventurous creatures, learning about their amazing behaviours and habitats.

Each section begins with an infographic map of the region it explores, followed by richly detailed two-page spreads featuring its most fascinating creatures. You'll get to run with the wildebeest in Kenya, nest with the puffins in Iceland, parade with the peacocks in India, hit the dance floor with the birds of paradise in New Guinea and go north with the narwhals of Canada, among many other adventures.

The quirky illustrations make the animals' lives relatable to our own with humorous surprises: look out for a drone bee delivering a bunch of flowers to his queen, polar bears using binoculars to watch for seals, and cold-blooded iguanas basking in the sun on beach blankets.

Interesting facts and figures pepper the scenes. Did you know that a Zambian fruit bat can gobble up to twice its body weight in fruit each night? Or that elephants have longer pregnancies than any other land animal - about 22 months!? Or that, at only one day old, a caribou calf can outrun a human? A 'Can you find?' page at the back challenges you to explore the pages even deeper by locating the pictured animals and objects.

Children and adults alike will find inspiration in the extraordinary feats of these wonderful creatures.

'Beautiful exploration of the natural world.' * Family Traveller *
'A truly stunning book full of animal wonders from right across the world.' * Read It Daddy *
'A terrific book! A collection of nature's most unmissable events, epic migrations and extraordinary behaviours.' * Books go Walkabout *
'This superb book takes the reader on an exciting and informative journey of discovery, continent by continent.' * Parents in Touch *
'This is the perfect Christmas gift - truly unique and stylish and absolutely the perfect book to gift to a child (or even a book loving adult!).' * Let Them Be Small *
'A lovely sequel to 'The Atlas of Adventures'.' * Cotswold Life *

Australian-born Rachel Williams studied creative writing before becoming an editor and publisher of children's books. She is the author of many books for children, including Atlas of Animal Adventures and Illuminature. She lives and works in London.

Emily Hawkins is a writer and editor of children's books for all ages. She wrote the New York Times bestseller Oceanology, as well as several other titles in the Ology series, which has sold over 16 million copies worldwide. She holds a first-class English degree from Nottingham University, and now lives in Winchester with her young family.

GOR008705124
9781847807922
1847807925
Atlas of Animal Adventures by Lucy Letherland
Lucy Letherland
Atlas of
Used - Like New
Hardback
Wide Eyed Editions
2016-09-01
96
N/A
Book picture is for illustrative purposes only, actual binding, cover or edition may vary.
The book has been read, but looks new. The book cover has no visible wear, and the dust jacket is included if applicable. No missing or damaged pages, no tears, possible very minimal creasing, no underlining or highlighting of text, and no writing in the margins
Trustpilot