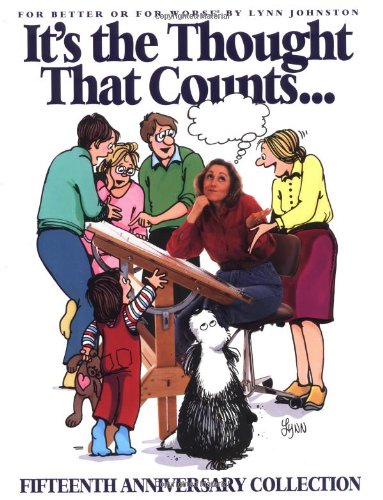 It's the Thought That Counts--
by Lynn Johnston

It's the Thought That Counts-- Summary

It's the Thought That Counts--: For Better or for Worse Fifteenth Anniversary Collection by Lynn Johnston

For years and years, Lynn Johnston has entertained, enlightened, and educated the world about the delights and disappointments of family life. Her strip is poignant and funny--and very often, universal. She captures a mother's frustration at an unruly teenager, a father's surprise in a growing daughter, and kids' various views about their future as they grow up.

In It's the Thought That Counts, For Better or For Worse looks back on many of the series' high points through Lynn's hand-picked selection of color Sundays: the unexpected birth of baby April in 1991; the daring revelation that teenage family friend Lawrence was gay; the fear that comes with aging parents. The collection also includes those quietly funny moments in families: a father and his kids romping with abandon; a closet full of clothes that no longer span a middle-aged girth; a teenage son's first experience with a crush.

Lynn Johnston fashioned the Patterson family after her own lively brood. Her real life experiences--divorce, childbirth, pets, and parents--show through in her work in the most wise and wonderful ways. Even better, this anniversary book contains Johnston's comments about some of her favorite strips in an amusing and informative narrative.

Lynn Johnston was born in Collingwood, Ontario, and grew up in British Columbia. Today, she lives in Corbeil, Ontario. Johnston is the first woman to receive a Reuben Award for Outstanding Cartoonist of the Year from the National Cartoonists Society in 1986. She has also received the Order of Canada and claims a star on Canada's Walk of Fame.

GOR004673749
It's the Thought That Counts--: For Better or for Worse Fifteenth Anniversary Collection by Lynn Johnston
Lynn Johnston
Used - Very Good
Paperback
Andrews McMeel Publishing
1994-08-01
230
0836217624
9780836217629
N/A
Book picture is for illustrative purposes only, actual binding, cover or edition may vary.
This is a used book - there is no escaping the fact it has been read by someone else and it will show signs of wear and previous use. Overall we expect it to be in very good condition, but if you are not entirely satisfied please get in touch with us.