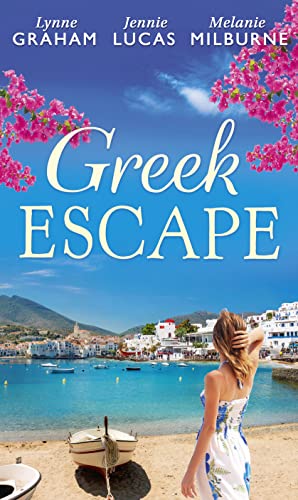 Greek Escape: The Dimitrakos Proposition / The Virgin's Choice / Bought for Her Baby (Bedded by Blackmail, Book 15) by Lynne Graham

Tabby Glover needs Greek Acheron Dimitrakos to support her adoption claim for his young cousin, but the arrogant billionaire only agrees if she will marry him. Accepting the outrageous terms, Tabby slowly surrenders to her devastating husband, but this marriage was to be in name only...

Xerxes Novros plans to steal virgin bride-to-be Rose away and whisk her off to his beautiful Greek Island. He plans to woo and win her, seducing Rose out of her poor choice... But soon Xerxes also wants to give Rose the wedding night she didn't get.

Greek billionaire Damon Latousakis is claiming Charlotte Woodruff as his mistress, but they have a past. Keeping their daughter hidden from Damon is no longer possible and when he finds out he demands that his mistress becomes his wife!

Lynne Graham lives in Northern Ireland and has been a keen romance reader since her teens. Happily married, Lynne has five children. Her eldest is her only natural child. Her other children, who are every bit as dear to her heart, are adopted. The family has a variety of pets, and Lynne loves gardening, cooking, collecting allsorts and is crazy about every aspect of Christmas. Jennie Lucas's parents owned a bookstore and she grew up surrounded by books, dreaming about faraway lands. At twenty-two she met her future husband and after their marriage, she graduated from university with a degree in English. She started writing books a year later. Jennie won the Romance Writers of America's Golden Heart contest in 2005 and hasn't looked back since. Visit Jennie's website at: www.jennielucas.com Melanie Milburne read her first Harlequin at age seventeen in between studying for her final exams. After completing a Masters Degree in Education she decided to write a novel in between settling down to do a PhD. She became so hooked on writing romance the PhD was shelved and soon after she was signed on to the London office of Harlequin Mills and Boon line, becoming the first not previously published Australian author to be contracted for the Presents line in over a decade.

GOR008223562
Greek Escape: The Dimitrakos Proposition / The Virgin's Choice / Bought for Her Baby (Bedded by Blackmail, Book 15) by Lynne Graham
Lynne Graham
Used - Very Good
Paperback
HarperCollins Publishers
2017-03-09
576
0263930807
9780263930801
N/A
Book picture is for illustrative purposes only, actual binding, cover or edition may vary.
This is a used book - there is no escaping the fact it has been read by someone else and it will show signs of wear and previous use. Overall we expect it to be in very good condition, but if you are not entirely satisfied please get in touch with us.