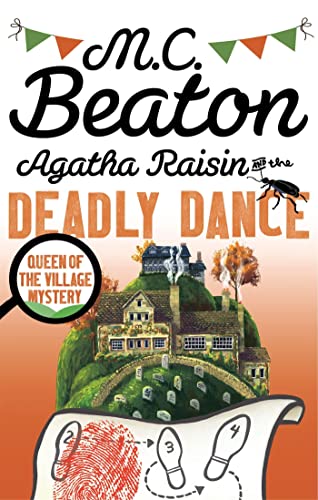 Agatha Raisin and the Deadly Dance
by M.C. Beaton

Used Price
£4.79
New RRP £8.99
Free Shipping in the UK
Agatha waltzes into yet another murder investigation in the fifteenth book in the series, complete with brand new cover design.
Reviews:
Trustpilot
Like New Very Good Good

Agatha Raisin and the Deadly Dance by M.C. Beaton

There may be trouble ahead . . . so will Agatha face the music?

Can the feisty Agatha cut it as a private investigator? She soon learns that running her own detective agency in the Cotswolds is not quite like starring in a Raymond Chandler movie. But then walks in wealthy divorcee Catherine Laggat-Brown, and Agatha is given her first real case. Death threats, blackmail and physical attack soon follow, and once again Agatha is off scouring the countryside for clues and showing friends and enemies alike what Raisin Investigations can do!

'A potent cocktail of satire, mystery and adventure that will leave you wanting more' Myshelf.com

`The detective novels of M C Beaton, a master of outrageous black comedy, have reached cult status.' -- Anne Robinson * The Times *
Agatha is like Miss Marple with a drinking problem, a pack-a-day habit and major man lust. In fact, I think she could be living my dream life. * Entertainment Weekly *

M.C. Beaton is the internationally bestselling author of both the Agatha Raisin and Hamish Macbeth series, as well as numerous Regency romances. Her books have been translated into seventeen languages and her Agatha Raisin mysteries have been made into a Sky TV series starring Ashley Jensen. M. C. Beaton is consistently the most borrowed UK adult author in British libraries. She lives in a Cotswold village that is very much like Agatha's beloved Carsely.

GOR008654725
Agatha Raisin and the Deadly Dance by M.C. Beaton
M.C. Beaton
Agatha Raisin
Used - Like New
Paperback
Little, Brown Book Group
2016-04-07
288
1472121392
9781472121394
N/A
Book picture is for illustrative purposes only, actual binding, cover or edition may vary.
This is a used book - there is no escaping the fact it has been read by someone else and it will show signs of wear and previous use. Overall we expect it to be in very good condition, but if you are not entirely satisfied please get in touch with us.