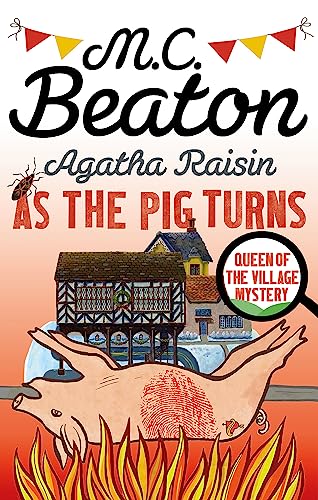 Agatha Raisin: As The Pig Turns
by M.C. Beaton

In Stock
£5.99
The as ever eagerly awaited 22nd installment of Agatha Raisin.
Like New Very Good Good Well Read
Only 4 left

Agatha Raisin: As The Pig Turns by M.C. Beaton

Winter Parva, a traditional Cotswolds village next door to Carsely, has decided to throw a celebratory hog roast to mark the beginning of the winter holiday festivities and Agatha Raisin has arrived with friend and rival in the sleuthing business, Toni, to enjoy the merriment. But, as the spit pig is carried towards the bed of fiery charcoal, Agatha - and the rest of the village - realise that things aren't as they seem...

Very quickly it transpires that the spit pig is in fact Gary Beech, a policeman not much loved in Winter Parva. And although Agatha has every intention of leaving the affair to the police, she rapidly changes her mind when she finds out Gary's ex-wife has hired Toni to investigate. Cantankerous and competitive as Agatha is, she has to now join the fray and try and solve the case herself!

'I know I once vowed to read only Agatha Christie for a year but I cheated. My No. 1 mistress, M.C. Beaton and her Agatha Raisin whodunits. Agatha is like Miss Marple with a drinking problem, a pack a day habit and major man lust. In fact, I think she may be living my dream life' Entertainment Weekly.

'Once again M. C. Beaton has concocted an amusing brew of mystery and romance that will keep her fans turning the pages' Publisher's Weekly.

GOR010228909
Agatha Raisin: As The Pig Turns by M.C. Beaton
M.C. Beaton
Agatha Raisin
Used - Like New
Paperback
Little, Brown Book Group
2016-10-06
272
1472121465
9781472121462
N/A
Book picture is for illustrative purposes only, actual binding, cover or edition may vary.
The book has been read, but looks new. The book cover has no visible wear, and the dust jacket is included if applicable. No missing or damaged pages, no tears, possible very minimal creasing, no underlining or highlighting of text, and no writing in the margins.