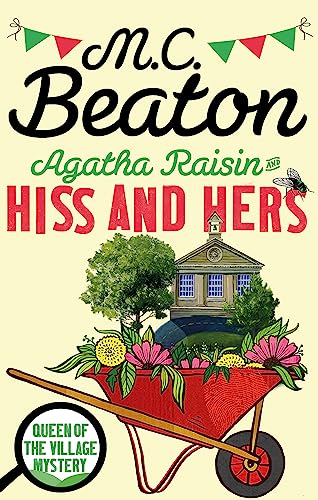 Agatha Raisin: Hiss and Hers
by M.C. Beaton

Agatha Raisin: Hiss and Hers Summary

Agatha Raisin: Hiss and Hers by M.C. Beaton

Agatha has fallen in love - again. This time it's the local gardener, George Marston, she has her eye on. But competition for his attention abounds. With her shameless determination Agatha will do anything to get her man - including footing the bill for a charity ball in town just for the chance to dance with him. But when George is a no-show Agatha goes looking for him - and finds he has been murdered, having been bitten by a poisonous snake and buried in a compost heap.

Agatha and the rest of her crew plunge into an investigation and discover that George had quite a complicated love life. And if Agatha now can't have George, at least she can have the satisfaction of confronting those women who have and finding a murderer in the process.

Agatha Raisin: Hiss and Hers Reviews

GOR010228985
Agatha Raisin: Hiss and Hers by M.C. Beaton
M.C. Beaton
Agatha Raisin
Used - Like New
Paperback
Little, Brown Book Group
2017-01-05
272
1472121473
9781472121479
N/A
Book picture is for illustrative purposes only, actual binding, cover or edition may vary.
The book has been read, but looks new. The book cover has no visible wear, and the dust jacket is included if applicable. No missing or damaged pages, no tears, possible very minimal creasing, no underlining or highlighting of text, and no writing in the margins.