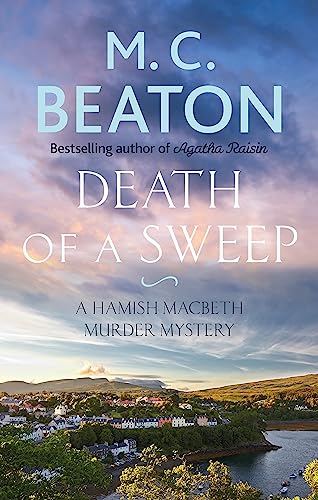 Death of a Sweep
by M.C. Beaton

Used Price
£4.49
New RRP £8.99
Free Shipping in the UK
From the author of the ever-popular Agatha Raisin series, this is the 26th outing for the Highland's most famous PC, Hamish Macbeth.
Reviews:
Trustpilot
Like New Very Good Good Well Read

Death of a Sweep Summary

Death of a Sweep by M.C. Beaton

The 26th outing for the Highland's most famous PC: Hamish Macbeth

In the south of Scotland, residents get their chimneys vacuum-cleaned. But in the isolated villages in the very north of Scotland, the villagers rely on the services of the itinerant sweep, Pete Ray, and his old-fashioned brushes. Pete is always able to find work in the Scottish highlands, until one day when Police Constable Hamish Macbeth notices blood dripping onto the floor of a villager's fireplace, and a dead body stuffed inside the chimney.

The entire town of Lochdubh is certain Pete is the culprit, but Hamish doesn't believe that the affable chimney sweep is capable of committing murder. Then Pete's body is found on the Scottish moors, and the mystery deepens. Once again, it's up to Hamish to discover who's responsible for the dirty deed - and this time, the murderer may be closer than he realizes.

Praise for the Hamish Macbeth series:

Customer Reviews - Death of a Sweep

M.C. Beaton is the internationally bestselling author of both the Agatha Raisin and Hamish Macbeth series, as well as numerous Regency romances. Her books have been translated into seventeen languages and her Agatha Raisin mysteries have been made into a Sky TV series starring Ashley Jensen. M. C. Beaton is consistently the most borrowed UK adult author in British libraries. She lives in a Cotswold village that is very much like Agatha's beloved Carsely.

GOR010136890
Death of a Sweep by M.C. Beaton
M.C. Beaton
Hamish Macbeth
Used - Like New
Paperback
Little, Brown Book Group
2019-05-02
288
1472124626
9781472124623
N/A
Book picture is for illustrative purposes only, actual binding, cover or edition may vary.
This is a used book - there is no escaping the fact it has been read by someone else and it will show signs of wear and previous use. Overall we expect it to be in very good condition, but if you are not entirely satisfied please get in touch with us.