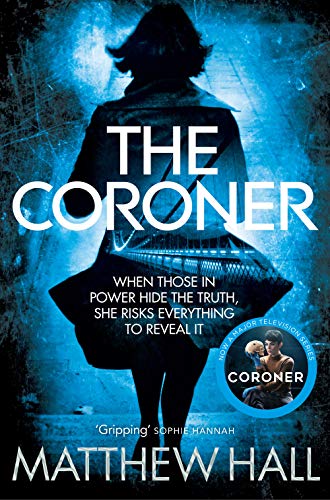 The Coroner
by M. R. Hall

In Stock
£5.99
Meet Coroner Jenny Cooper, a fearless yet human heroine and the last hope for the unjustly killed.
Like New Very Good Good
13 in stock

The Coroner by M. R. Hall

When those in power hide the truth, she risks everything to reveal it.

When lawyer, Jenny Cooper, is appointed Severn Vale District Coroner, she's hoping for a quiet life and space to recover from a traumatic divorce, but the office she inherits from the recently deceased Harry Marshall contains neglected files hiding dark secrets and a trail of buried evidence.

Could the tragic death in custody of a young boy be linked to the apparent suicide of a teenage prostitute and the fate of Marshall himself? Jenny's curiosity is aroused. Why was Marshall behaving so strangely before he died? What injustice was he planning to uncover? And what caused his abrupt change of heart?

In the face of powerful and sinister forces determined to keep both the truth hidden and the troublesome coroner in check, Jenny embarks on a lonely and dangerous one-woman crusade for justice which threatens not only her career but also her sanity.

The Coroner is followed by the second book in the Coroner Jenny Cooper series, The Disappeared.

The Jenny Cooper novels have been adapted into a hit TV series, Coroner, made for CBC and NBC Universal starring Serinda Swan and Roger Cross.

It's a tribute to the author's skill that I read this book supposing it to be autobiographical . . . He really gets under the skin of his heroine . . . Good and imaginative writing (and some political implications) to make an outstandingly interesting first novel * The Literary Review *
A compelling debut * Sainsburys Magazine *
This big, well-executed debut novel by screenwriter and producer Matthew Hall has meaty characters and a chewy plot in the Lynda La Plante style * Guardian *
A brilliant, original and gripping crime novel - I can't wait for Matthew Hall's next one! -- Sophie Hannah
Unputdownable debut introducing a fantastic, feisty and convincingly flawed heroine * Woman & Home *
Congratulations to new crime fiction author Matthew Hall . . . A refreshing take on a historic office . . . Convincing and compelling * Daily Mail *
A fast paced debut thriller * The Times *
There's much to like here, including the unusual viewpoint, the strong narrative, and the solidly researched background * Spectator *
A gripping debut novel * Daily Express *
Hall's heroine is believable enough to care about, and it's good to see a novel niche being carved in the crowded realm of whodunits. Perhaps it'll do for coroners' courts what CSI did for forensic science * Observer *

Matthew (formerly M. R.) Hall is a screenwriter and producer and former criminal barrister, a profession he left due to a constitutional inability to prosecute. Educated at Hereford Cathedral School and Worcester College, Oxford, he lives in the Wye Valley in Monmouthshire with his wife, journalist Patricia Carswell, and two sons. Aside from writing, his main passion is the preservation and planting of woodland. In his spare moments, he is mostly to be found amongst trees. His books in the Coroner Jenny Cooper series include The Coroner, The Disappeared, The Redeemed, The Flight, The Chosen Dead, The Burning and A Life to Kill.

GOR001159499
The Coroner by M. R. Hall
M. R. Hall
Coroner Jenny Cooper series
Used - Very Good
Paperback
Pan Macmillan
2009-11-01
464
0330458361
9780330458368
Short-listed for CWA Goldsboro Gold Dagger 2009 (UK) Short-listed for Waverton Good Read Award 2009 (UK)
Book picture is for illustrative purposes only, actual binding, cover or edition may vary.
This is a used book - there is no escaping the fact it has been read by someone else and it will show signs of wear and previous use. Overall we expect it to be in very good condition, but if you are not entirely satisfied please get in touch with us.