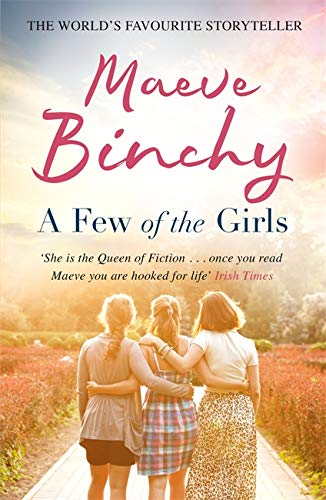 A Few of the Girls
by Maeve Binchy

Used Price
£4.49
New RRP £8.99
Free Shipping in the UK
A superb collection from the No.1 bestselling author: 'Reading her books is like gossiping with old friends' DAILY EXPRESS
Reviews:
Trustpilot
Very Good Good

A Few of the Girls Summary

A Few of the Girls by Maeve Binchy

'The Irish do love telling stories, and we are suspicious of people who don't have long, complicated conversations. There used to be a rule in etiquette books that you should invite four talkers and four listeners to a dinner party. That doesn't work in Ireland, because nobody knows four listeners' Maeve Binchy

Maeve Binchy's bestselling novels not only tell wonderful stories, they also give an insight in to how Ireland has changed over the decades, and how people remain the same: they still fall in love, sometimes unsuitably; they still have hopes and dreams; they have deep, long-standing friendships, and some that fall apart. From her earliest writing to her most recent, Maeve's work has included wonderfully nostalgic pieces and also sharp, often witty writing which is insightful and topical.

But at the heart of all Maeve's fiction are the people and their relationships with each other. A FEW OF THE GIRLS is a glorious collection of the very best of her writing, full of the warmth, charm and humour that has always been essentially Maeve.

Customer Reviews - A Few of the Girls

A Few of the Girls Reviews

This new collection of Maeve's beloved short stories will force you to put down your smartphone in favour of your favourite armchair and this hardback. Featuring some of her best works it is a fine tribute to a very fine author * IMAGE magazine *
The stories bring to life well-developed characters, often in the space of a few paragraphs, and brim with Maeve's warmth and common sense. She writes particularly well on loneliness, and about the hopes and fears of young people on the cusp of adulthood * IRISH INDEPENDENT *
These stories are full of warmth and humour...easy to read and an ideal present for any of her fans * WOMAN'S WAY *
The wit, humanity and truths of dearly departed Maeve Binchy live on in her absorbing fictions as this collection of 41 stories proves. * RTE GUIDE *

Maeve Binchy was born in County Dublin and educated at the Holy Child convent in Killiney and at University College, Dublin. After a spell as a teacher she joined the Irish Times. Her first novel, Light a Penny Candle, was published in 1982 and she went on to write over twenty books, all of them bestsellers. Several have been adapted for cinema and television, most notably Circle of Friends and Tara Road. Maeve Binchy received a Lifetime Achievement Award at the British Book Awards in 1999 and the Irish PEN/A.T. Cross award in 2007. In 2010 she was presented with the Bob Hughes Lifetime Achievement Award at the Bord Gais Irish Book Awards by the President of Ireland. She was married to the writer and broadcaster Gordon Snell for 35 years, and died in 2012.