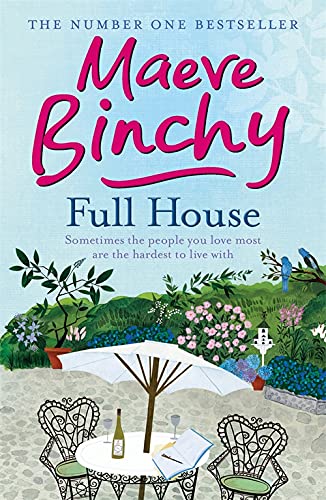 Dee loves her children very much, but now they are all grown up, shouldn't they leave home?

Rosie moved out when she got married, but it didn't work out, so now she is back with her parents. Helen is a teacher, and doesn't earn enough for a place of her own. Anthony writes songs, and is just waiting for the day when someone will pay him for them. Until then, all three are happy at home. It doesn't cost them anything, and surely their parents like having a full house?

When a crisis occurs, Dee decides things have to change for the whole family...whether they like it or not.

Maeve Binchy, as always, explores the truth of family relationships with honesty, humour and compassion in a style that is uniquely her own. Wonderful. * Parent Talk *

Maeve Binchy was born in County Dublin and educated at the Holy Child convent in Killiney and at University College, Dublin. After a spell as a teacher she joined the Irish Times. Her first novel, LIGHT A PENNY CANDLE, was published in 1982 and she went on to write over twenty books, all of them bestsellers. Several have been adapted for cinema and television, including TARA ROAD. Maeve Binchy received a LIFETIME ACHIEVEMENT AWARD at the BRITISH BOOK AWARDS in 1999 and the Irish PEN/A. T. CROSS AWARD in 2007. In 2010 she was presented with the BOB HUGHES LIFETIME ACHIEVEMENT AWARD at the BORD GAIS IRISH BOOK AWARDS by the President of Ireland. She was married to the writer and broadcaster Gordon Snell for 35 years, and died in 2012. Visit her website at www.maevebinchy.com

GOR003421621
Full House by Maeve Binchy
Maeve Binchy
Used - Very Good
Paperback
Orion Publishing Co
2012-02-02
128
1409136612
9781409136613
N/A
Book picture is for illustrative purposes only, actual binding, cover or edition may vary.
This is a used book - there is no escaping the fact it has been read by someone else and it will show signs of wear and previous use. Overall we expect it to be in very good condition, but if you are not entirely satisfied please get in touch with us.