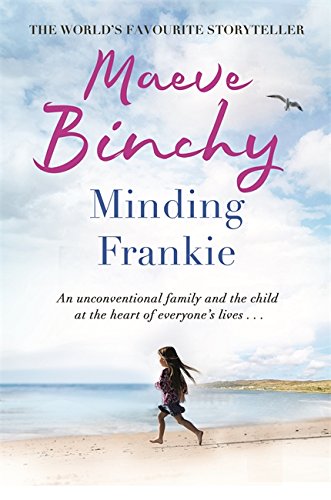 Used Price
£3,19
New RRP £9,99
Free Shipping in the UK
A superb novel about unconventional families, relationships which aren't quite what they seem, and the child at the heart of everyone's lives... from No. 1 bestselling author Maeve Binchy: 'She is the Queen of Fiction...Once you read Maeve you are hooked for life' Irish Times
Reviews:
Trustpilot
Very Good

Baby Frankie is born into an unusual family. Her mother is desperate to find someone to take care of her child and she doesn't have much time.

Noel doesn't seem to be the most promising of fathers but despite everything, he could well be Frankie's best hope.

As for Lisa, she is prepared to give up everything for the man she loves; surely he's going to love her back?

And Moira is having none of it. She knows what's right, and has the power to change the course of Frankie's life...but Moira is hiding secrets of her own.

Binchy weaves her magic once again in an addictive story about families and people who aren't always quite what they seem. * WOMAN & HOME *
One of our best-loved novelists weaves an intriguing story. * WOMAN'S OWN *
An absolute delight from the most loved of storytellers. Maeve Binchy works her usual magic as we unravel the truth and joy - and sadness too - behind the story of two young people as they grow up to find fulfilment. * MY WEEKLY *
This highly acclaimed Irish author has produced yet another heart-warmer ... a lovely story of unconventional relationships and the importance of children. * SOUTH WALES ARGUS *
A delightful book about an unusual family * IRISH NEWS *
A heart-warming tale of how affection and determination can deliver the love a child needs to flourish in an unconventional environment. * GOOD BOOK GUIDE *
In 27 years Maeve Binchy has sold more than 40 million books. MINDING FRANKIE is a reminder of the author's savvy ability to delivery what her loyal following has come to expect. * IRISH TIMES *
Maeve Binchy is a sublime storyteller, and with MINDING FRANKIE you are captured from the very first page until the final poignant last sentence. Her characters are always well drawn and this book is no exception, you are taken inside their lives and relationships. If you are looking for a book for a very satisfying weekend, or autumn read, this is absolutely perfect! Highly Recommended! * HOT BRANDS COOL PLACES *
Binchy ... is a class act. * DAILY EXPRESS *
It'll restore your faith in humanity. * ESSENTIALS *
Maeve Binchy's novel are just the kind of comforting companions so many women can't wait to take to bed. ...Binchy's prose flows as naturally as conversation with a good friend. * THE LADY *
Populated by a huge cast of completely believable characters, Minding Frankie is a delight of a book. * THE UNIVERSE *
A must read book. * WOMAN'S WAY *

Maeve Binchy was born in County Dublin and educated at the Holy Child convent in Killiney and at University College, Dublin. After a spell as a teacher she joined the Irish Times. Her first novel, LIGHT A PENNY CANDLE, was published in 1982 and she went on to write over twenty books, all of them bestsellers. Several have been adapted for cinema and television, including TARA ROAD. Maeve Binchy received a LIFETIME ACHIEVEMENT AWARD at the BRITISH BOOK AWARDS in 1999 and the Irish PEN/A. T. CROSS AWARD in 2007. In 2010 she was presented with the BOB HUGHES LIFETIME ACHIEVEMENT AWARD at the BORD GAIS IRISH BOOK AWARDS by the President of Ireland. She was married to the writer and broadcaster Gordon Snell for 35 years, and died in 2012. Visit her website at www.maevebinchy.com

GOR002798726
Minding Frankie by Maeve Binchy
Maeve Binchy
Used - Very Good
Paperback
Orion Publishing Co
2011-06-09
496
140911791X
9781409117919
N/A
Book picture is for illustrative purposes only, actual binding, cover or edition may vary.
The book has been read but remains in clean condition. All pages are intact and the cover is intact. Some minor wear to the spine.